More than 50 dead in Afghan flooding 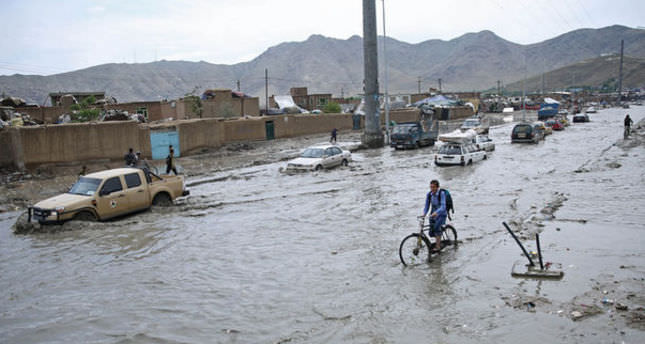 by Associated Press Jun 07, 2014 12:00 am
KABUL, Afghanistan — Flooding in a remote part of northern Afghanistan has claimed more than 50 lives and forced thousands to flee their homes, a provincial official said Saturday.

It was the latest in a string of deadly flash floods, landslides and avalanches in Afghanistan's rugged northern mountains, where roads are poor and many villages are virtually cut off from the rest of the country.

Lt. Fazel Rahman, the police chief in the Guzirga i-Nur district of the northeastern Baghlan province, said 54 bodies have been recovered, including the remains of women and children, but many others are still missing. He said the death toll could climb to 100 and called for emergency assistance from the central government.

"So far no one has come to help us. People are trying to find their missing family members," Rahman said, adding that the district's police force was overstretched by the scale of the disaster.

Gen. Mohammad Zahir Azimi, spokesman for the Afghan Defense Ministry, said two Army helicopters have been sent to the area to provide assistance.

The Afghanistan Natural Disaster Management Authority (ANDMA) has stockpiles of food and other supplies in Baghlan province and has started the process of shipping them to the affected area, said Mohammad Aslim Sayas, deputy director of the agency.

He said a delegation has been sent to the affected villages to assess needs.

Jawed Basharat, the spokesman for the Baghlan provincial police, said they were aware of the flooding, but that it would take eight to nine hours for them to reach the area by road.

Afghans living in the northern mountains have largely been spared from the country's decades of war, but are no strangers to natural disasters.

Last month a landslide triggered by heavy rain buried large sections of a remote northeastern village in the Badakhshan province bordering China, displacing some 700 families. Authorities have yet to provide an exact figure on the number of dead from the May 2 landslide, and estimates have ranged from 250 to 2,700. Officials say it will be impossible to dig up all the bodies.

A landslide in Baghlan province in 2012 killed 71 people. After days of digging unearthed only five bodies, authorities decided to halt the recovery effort and turn the area into a memorial for the dead.