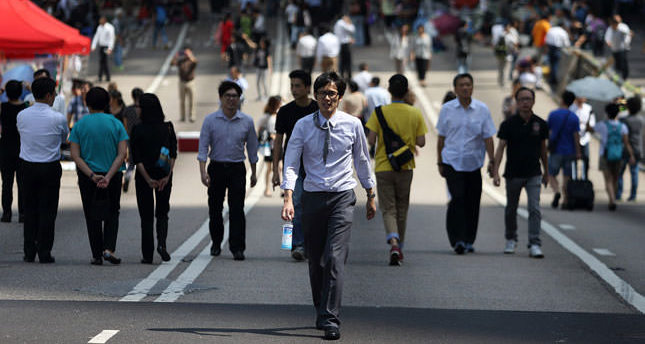 by Associated Press Oct 08, 2014 12:00 am
Crowds of protesters who filled Hong Kong's streets thinned dramatically Tuesday after student leaders and the government agreed to discuss activists' demands for a bigger public voice in choosing the territory's next leader. A few dozen students held stretches of highway where tens of thousands of demonstrators filled streets last weekend. One young protester sleepily brushed his teeth as rush hour began, spitting into a storm drain along the blockaded six-lane highway that cuts through the heart of Hong Kong's business district. Nearby, a demonstrator slept in a nylon chair, his mouth open and his eyeglasses askew. Despite the dwindling numbers of activists on the streets, student leaders insisted the movement was far from defeated. They vowed to walk away from negotiations if the police used force to clear away the remaining demonstrators. "It's up to the government now. This is the first step, but the pressure has to continue," said Alex Chow, a student leader. Earlier crackdowns have backfired on the government. When police fired tear gas and pepper spray on unarmed demonstrators on Sept. 28, it caused an upsurge in support for protesters and brought tens of thousands of Hong Kong residents into the streets.

The protesters are demanding a wider say in the inaugural 2017 elections for Hong Kong's top official, known as the chief executive, than China's central government is prepared to give them. Beijing, which controls Hong Kong but allows far more liberty here than on the mainland, insists candidates, be screened by a committee of mostly pro-Beijing tycoons and other elites, raising fears of communist leaders' tightening grip. Late Monday, Lau Kong-wah, the territory's undersecretary of constitutional affairs, said the government and students had agreed on terms for talks, saying the two sides would enter discussions on an equal footing. Lester Shum, a leader of the Hong Kong Federation of Students, confirmed the agreement, but said they had not discussed or reached a consensus on the agenda. A date for the talks had not been set.

On Monday, Chief Executive Leung Chun-ying, who has rejected the protesters' calls for him to resign, said in a TV address that the government would seek "a sincere dialogue on political reform." At the same time, he urged the end to the blockade of the streets and issued veiled warnings that the authorities would eventually need to "restore social order." "I hope that the protesters gathering on the roads, especially students and young people, could think this over: While fighting for a better future and democracy for Hong Kong by way of civil disobedience, should you also consider the prolonged disruption caused to the general public by the Occupy Central movement?," he said, referring to one of the protest group's names. Primary schools in districts that were affected by the protests reopened Tuesday, a day after high school classes resumed. Civil servants returned to work after protesters cleared the area outside the city government headquarters.