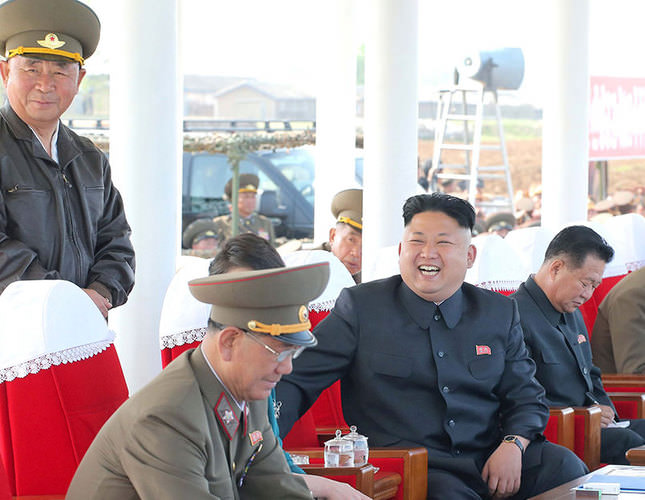 by Oct 10, 2014 12:00 am
North Korean leader Kim Jong-Un apparently missed a key political event Friday, extending a month-long absence that has fuelled rampant speculation about his physical and political health, although South Korea believes he remains in full control.

Kim was not listed by the state KCNA news agency as being among the officials who made an annual pilgrimage to the mausoleum in Pyongyang housing the remains of his father and grandfather.

However, a floral tribute bearing Kim's name was presented to the two statues of Kim Jong-Il and Kim Il-Sung to mark the 69th anniversary of the North Korean ruling party's foundation, the agency said.

Kim, believed to be 30 or 31, has not been seen since September 3 when he attended a music concert with his wife in Pyongyang.

Competing theories for his disappearance range widely from an extended rest period to a leadership coup, via a long list of possible illnesses and ailments including broken ankles, gout and diabetes.

South Korea, which has largely distanced itself from the guessing game, said it saw no indication to suggest Kim was no longer in charge.

"Judging from these, it seems that Kim Jong-Un is ruling normally," Lim said, adding that the government had no specific intelligence on Kim's health.

Kim's absence from the Kumsusan mausoleum visit was significant as he has attended each year since coming to power following the death of his father in 2011.

While he could still make an appearance later in the day, a complete no-show will likely send an already whirring rumour mill into overdrive.

The explanation with the most currency is a health issue that has left him temporarily incapacitated.

Kim, a heavy smoker, has shown striking weight gain since coming to power following the death of his father in 2011, and recent TV footage had shown him walking with a pronounced limp.

"My own feeling is that there has been a health problem, but not a particularly serious one," said Chung Young-Chul, a professor of North Korean studies at Sogang University in Seoul.

"A no-show would certainly force us to consider the possibility that it's more serious than we thought," Chung said.

In a front-page editorial on Friday, the Rodong Sinmun described Kim as the symbol of the ruling party's "dignity and invincibility", and said his authority should be protected by all means necessary.

"The steel-like unity of the party, with the leader at the centre, is the source of invincible power," the party mouthpiece said.

What little light North Korea has deemed necessary to shed on the rumours surrounding Kim's absence has only added to the confusion.

State media alluded at one point to his "discomfort", but one member of a top-level North delegation that visited South Korea last week insisted Kim had no health problem at all.

"He certainly doesn't want to be seen while he is sick and looking weak," said Bruce Bennett, a senior defence analyst with the RAND corporation.

"Looking weak is not good for a North Korean leader who is trying to maintain control," Bennett said.

The uncertainty means that every move or comment by North Korea is now seen through the unreliable prism of what it might say about Kim's situation.

Some saw the surprise visit by the high-ranking delegation as a message that all was normal in Pyongyang.

Others saw the presence of Kim's de-facto number two in the delegation as possible evidence that the leader may have been sidelined or pushed out altogether.

It is by no means unprecedented for a North Korean leader to drop out of the public eye for a while.

But it is more noticeable with Kim, who has maintained a particularly pervasive media presence since coming to power after the death of his father Kim Jong-Il in 2011.