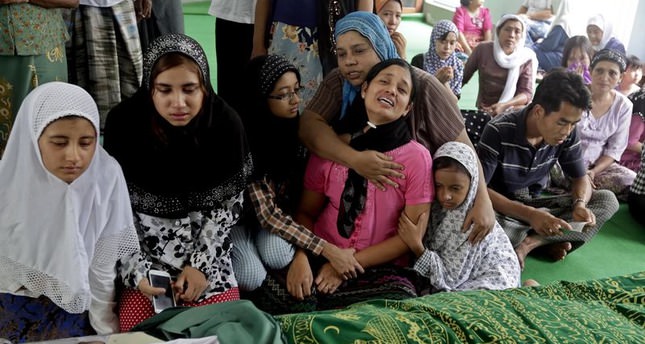 by Nov 07, 2014 12:00 am
A U.S. government agency called on President Barack Obama on Thursday to meet with Rohingya Muslims and other minorities when he visits Myanmar this month and to press the government to act to prevent "serious and alarming violence" against them.

The U.S. Commission on International Religious Freedom also said the United States should continue to use sanctions against officials and individuals in Myanmar responsible for religious persecution and consider a binding agreement with the government linking the lifting of sanctions to rights reform.

"The political reform process in Burma is at great risk of deteriorating if religious freedom and the right to equal treatment under the law are not honored and protected," the commission said in a report after its first visit to predominately Buddhist Myanmar, also known as Burma.

"USCIRF is concerned that recent openings have coincided with serious and alarming violence against religious and ethnic minorities."

The report from the commission, an independent, bipartisan agency funded by the U.S. government, said attacks against Muslims, particularly stateless Rohingya Muslims, as well as Christians, had continued with impunity and the government appeared "unable or unwilling to address the abuses."

The commission called the situation faced by Rohingya Muslims in Rakhine state "appalling" and said its four-member team was "struck by the bigotry and chauvinism exhibited by important religious figures within the Buddhist community."

The report highlighted proposed legislation to restrict religious conversions and marriages between people of different faiths and said this had "no place in the 21st century."

It urged Obama to meet Rohingya and other Muslims, Christians and activists when he visits Myanmar next week to attend regional summits.

The U.S. government, it said, should show solidarity by using the term "Rohingya," despite objections by government officials, and said U.S. Secretary of State John Kerry had disappointed Rohingyas by failing to do so on a visit in August.

"The United States and the international community need to ensure that religious freedom and related human rights remain a high priority in their engagement with the Burmese government while also assisting those in Burma subject to religious-based abuses," the report said.

The report said the abuses underlined the appropriateness of the continued designation of Myanmar as a "country of particular concern" by the State Department under the U.S. Religious Freedom Act and a U.S. arms embargo linked to this.

It said the U.S. should consider a binding framework linking an end to this designation to progress on religious freedom and other human rights issues.

Myanmar launched widespread economic and political reforms in 2011, convincing the West to suspend most sanctions on the country. However, Washington maintains a blacklist and imposed sanctions on a prominent lawmaker and businessman on Friday for undermining reforms.

Obama urged the protection of minorities in an Oct. 30 call to Myanmar President Thein Sein. He stressed the importance of addressing the humanitarian situation in Rakhine state and measures to support Rohingya rights.