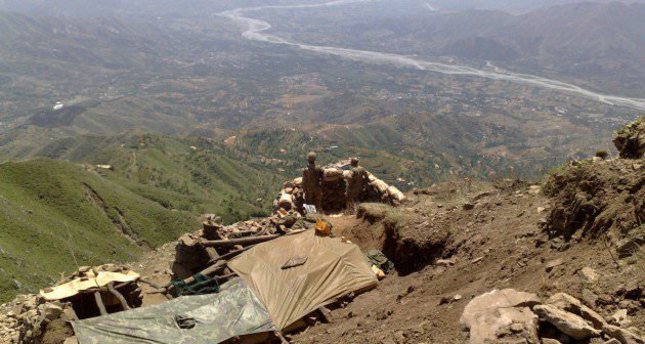 by Daily Sabah with Agencies
Nov 09, 2014 12:00 am
The Islamic State of Iraq and al-Sham (ISIS), which has become a popular group among radicals, has allegedly recruited as many as 12,000 tribesmen in Pakistan who previously supported the Taliban in the region. A report sent by the state government of northwestern province of Balochistan to the central government claimed that between 10,000 and 12,000 tribesmen joined ISIS, Hangu and Kurram Agency reported. The report, billed as a "secret information report," claimed that ISIS asked "elements" from Tehrik-e-Taliban Pakistan (TTP), a conglomerate of different insurgent groups operating in Pakistan, and hardline militant group Lashkar-e-Jhangvi to join its ranks to attack security installations and the minority Shiite community in Pakistan. The network has also formed a strategic planning wing to establish bases and recruit followers in Pakistan, the report stated. The report said that Pakistan's Khyber Pakhtunkhwa and Balochistan provinces must be prepared for possible ISIS attacks on the border with Afghanistan. The warning was issued weeks after six key Taliban commanders, including former TTP spokesman Shahidullah Shahid, announced their allegiance to ISIS leader Abu Bakr al-Baghdadi.

However, Rahimullah Yusufzai, a Peshawar-based expert on Afghan and tribal affairs said, "This [report] is a mere exaggeration as it does not have any basis." He said ISIS might have recruited "dozens" of members but they could not be in the thousands. "There is a very little space for ISIS in Pakistan because conditions are totally different here compared to Iraq and Syria," he said. "Those who have prepared this report do not even know about the reasons behind the creation of ISIS. It is a reaction to [former Iraqi prime minister] Nouri-al-Mailki's anti-Sunni policies. Whereas Sunnis are 85 per cent in Pakistan and do not face any threat from the Shiite minority," Yusufzai observed. Referring to the allegiance of six TTP commanders to ISIS, Yusufzai said, "It is interesting to see that ISIS has not publicly accepted their allegiance or even commented on it. It shows how seriously ISIS takes the Pakistani Taliban."

Kamal Hyder, an Islamabad-based security analyst, agrees. "I do not know what the base of this report is, but recruitment of 12,000 followers is even far from exaggeration," he added. Hyder thinks the militant network might recruit "some elements" that have parted ways with the TTP but it cannot capture a huge territory in Pakistan as it has done in Iraq and Syria. "Al-Qaida and the Taliban have already distanced themselves from ISIS while the majority of Pakistani Taliban have already announced their allegiance to Mullah Omar," he observed.

Previously, an Algerian armed group, which calls itself Jund al-Khalifa (Soldiers of the Caliphate), said that it has separated itself from al-Qaida and declared its obedience and loyalty to ISIS in September. Similarly, an armed group in the Philippines, Abu Sayyaf, declared its allegiance to ISIS.