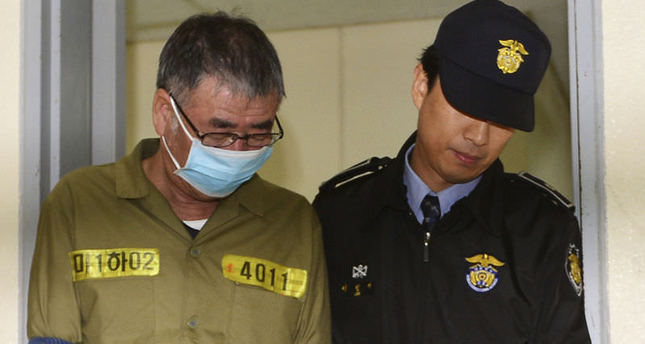 by Associated Press
Nov 11, 2014 12:00 am
The captain of a ferry that sank earlier this year off the coast of South Korea, leaving more than 300 people mostly schoolchildren dead and shocking the country, was given a 36-year prison sentence Tuesday for negligence and abandoning his passengers.

The highly anticipated verdict came amid continuing grief and finger-pointing over one of the worst disasters in South Korean history. Family members of the victims, most of whom were teenagers, immediately criticized the sentence for Captain Lee Joon-seok and other crew members as too lenient, some weeping and shouting during the court proceedings.

"Do you know how many children are dead?" one relative said, according to a defense lawyer.

The Gwangju District Court in southern South Korea acquitted Lee of a homicide charge because it was difficult to believe that he knew his actions would cause such a huge number of deaths, according to a court statement. It said that Lee had issued an evacuation order.

The widely vilified Lee could have received a death sentence for the homicide charge. South Korea hasn't executed anyone since late 1997, though its courts occasionally issue the punishment.

Lee has apologized for abandoning the passengers, but said he didn't know his actions would lead to so many deaths.

The engineer, Park Ki-ho, was convicted of the homicide charge because he abandoned two injured colleagues, escaped the ferry and failed to tell rescuers about them, even though he knew they would die without help, the court statement said.

The court, however, cleared two other crew members of homicide charges for the same reasoning used to acquit the captain of homicide, the statement said. Those crew members got 15 and 20 years in prison, it said.

Prosecutors and the crew members have one week to appeal, according to the court.

The 15 crew members tasked with navigating the ferry Sewol have faced scathing public criticism because they escaped the sinking ship while many of their passengers were still trapped inside. A total of 476 people were aboard the ship and only 172 were rescued. Most of the dead were teenage students traveling to a resort island on a school trip.

Nearly seven months after the sinking, 295 bodies have been recovered but nine are still missing. South Korean officials announced on Tuesday they had ended the searches for the missing because there was only a remote chance of finding more bodies while worries have grown over the safety of divers. Two civilian divers have died after falling unconscious during searches.

"As our loved ones remain trapped in the cold waters, this decision is unbearably painful for us. But we requested that the search operations be stopped" because of safety concerns, Min Dong-im, 36, the wife of a missing teacher, tearfully said at a televised news conference.

The sinking has prompted widespread grief and a rare bout of soul-searching about lax safety practices. Authorities blamed overloaded cargo, improper storage, untimely recuse efforts and corruption by the ship's owners that prevented enough spending on safety, along with the crew members' behavior, for the sinking.

Last Friday, South Korean lawmakers approved plans to disband the coast guard and transfer its responsibilities to other government agencies. The coast guard was criticized for its unprofessional and slow rescue efforts. Also last week, three relatives of the ship's billionaire owner were sentenced to up to three years in prison, about four months after the tycoon was found dead after he fled the law.

Prosecutors have accused the crew members of tacitly colluding to abandon the ship even though they knew that passengers would be trapped and killed after it sank. The defense in the trial has denied any collusion among the crew members, saying they were confused, injured and panicked.

Many student survivors have said they were repeatedly ordered over a loudspeaker to stay on the sinking ship and that they didn't remember any evacuation order being given before they helped each other flee the vessel.

Lee has said he issued an evacuation order for passengers. But he initially told reporters days after his arrest that he withheld the evacuation order because rescuers had yet to arrive and he feared for the passengers' safety in the cold, swift waters.

South Korea has spent months debating public safety issues that critics say were largely ignored while the country rose to an Asian economic power in the decades after the 1950-53 Korean War. But there have been a series of smaller deadly accidents since the sinking. In mid-October, for instance, 16 people watching an outdoor pop concert fell 20 meters (60 feet) to their deaths when a ventilation grate they were standing on collapsed.