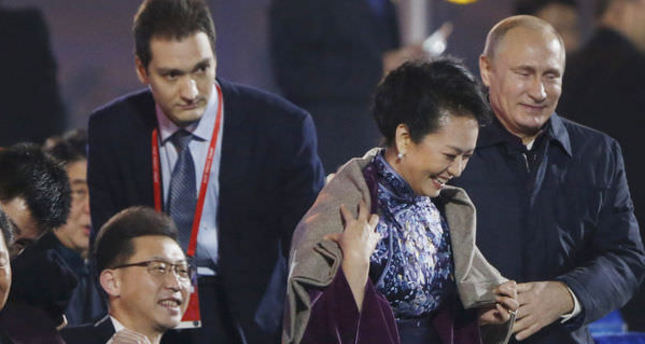 As the assembled world leaders waited for a fireworks display in temperatures barely above zero degrees Celsius Monday evening, Putin offered a blanket to Chinese President Xi Jinping's wife, who was seated next to him.

A live broadcast of the event on state media showed Peng Liyuan accepting the warm shoulder covering from her Russian neighbour, handing it to an aide seconds later, and putting on her own jacket.

Users of micro-blogging site Sina Weibo immediately picked up on the gesture from the newly divorced Putin.

"The Russian gentleman," is how one blogger praised Putin, who appears to enjoy his image back home as a Russian strongman.

"Putin flirts with the first lady!" exclaimed another.

The coverage of the summit, the biggest international event that Xi has presided over, was soon attracting the attention of Chinese censors.

Just hours later, online posts relating to the incident were removed, and video of the moment was apparently pulled from news websites.

Peng Liyuan is more visible than any previous wife of a Chinese leader, and her movements are closely followed by the media and public.

It was not the first time that Putin has gone out of his way to act chivalrous toward female dignitaries.

During last year's G20 summit in St Petersburg, the Russian leader made headlines when he cast a blanket over German Chancellor Angela Merkel during a late-night open air concert.