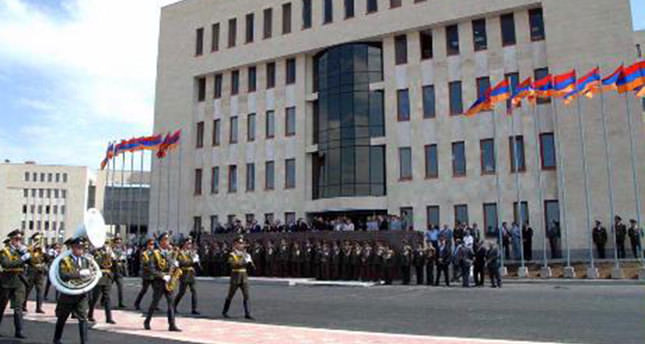 Armenia threatened 'grave consequences' on Wednesday after Azerbaijani forces shot down a military helicopter, sparking fears of a major escalation in the conflict over the disputed region of Nagorny Karabakh.

The downing of the helicopter belonging to the army of the breakaway ethnic Armenian region is the most serious incident on the Karabakh border since a 1994 ceasefire ended a bloody war that cost 30,000 lives.

Armenian media reported that the helicopter's three crew members were all killed.

Yerevan vowed that Baku will face "grave consequences", fuelling fears that the incident might seriously undermine a shaky peace.

"This is an unprecedented escalation and the consequences for Azerbaijan will be grave," said Armenia's foreign ministry spokesman Artsrun Hovannisyan.

"Azerbaijan's claim that the Armenian helicopter attacked its positions is not true. Examination of the wreckage will prove that the helicopter carried no weapons," he told AFP.

Two decades after a ceasefire agreement ended their bitter war over Karabakh, Azerbaijani and Armenian forces have regularly exchanged fire across their frontier and along the Karabakh frontline.

Last August saw an unprecedented spiral of violence with more than 20 troops killed from both sides in the deadliest clashes since an overall ceasefire was agreed.

Armenia-backed separatists seized the mountainous region, which is mainly inhabited by ethnic Armenians, from Azerbaijan in a war in the 1990s.

Despite years of negotiations, the two sides have not yet signed a final peace deal, with Karabakh still internationally recognised as part of Azerbaijan.

Oil-rich Azerbaijan, whose military spending exceeds Armenia's entire state budget, has threatened to take back the region by force if negotiations do not yield results.

Armenia, which is heavily armed by Russia, says it could crush any offensive. Last month Europe made a fresh push to end the festering conflict.

Tensions between Azerbaijan and Russia-allied Armenia are escalating as Moscow confronts the West over Ukraine, where government forces are battling pro-Russian separatists. "What happened in Ukraine has had a direct impact" on the Karabakh conflict, a source in Hollande's entourage said in October, adding that Russia's annexation of Crimea "exacerbated the climate".