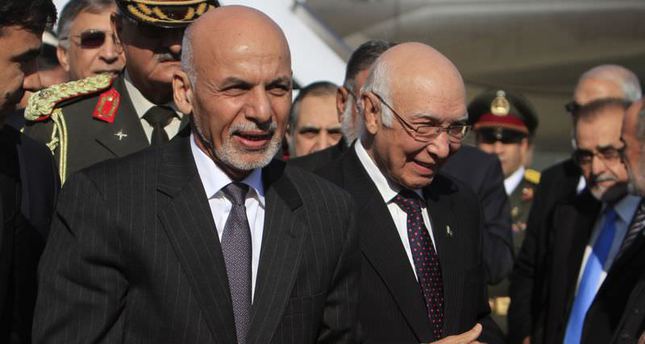 by AA
Nov 14, 2014 12:00 am
Afghan President Ashraf Ghani Ahmadzai has tried to heal the damaged relationship with neighboring Pakistan by making his first trip to Islamabad as President on Friday.

He became the first ever Afghan President to be invited to the Pakistan army's headquarters, where he was greeted with a guard of honor and met army chief General Raheel Sharif for the second time in two weeks.

Ghani will be meeting with Pakistan's Prime Minister Nawaz Sharif during his visit, hoping that the Pakistani government can help Afghanistan to establish peace talks with the Taliban. Both countries have previously accused each other of patronizing Taliban militants within each other's country.

Soon after taking his position as the new President in September, Ghani invited the Taliban to negotiations, though the offer was rejected.

Ghani is also believed to be using this trip to build business relations with Pakistan, which could help stimulate Afghanistan's aid-driven economy.

With the first peaceful democratic transition of power in Afghanistan, analysts believe this is a unique opportunity for the two neighboring countries to renew their relationship.

"This visit will indicate the future relations between the two countries. It will also indicate how the otherwise frayed relations have transformed with the change in government in Kabul," said Abdul Khalique Ali, a Karachi-based political and security analyst. "Things are not simple. They are complicated, and need a sincere approach to resolve."

According to Ismail Khan, a Peshawar-based security analyst, both countries have realized their common interests.

"Mr Ghani is an economist and he fully understands the importance of Pakistan for the economy of his land-locked country. Similarly, Islamabad has understood that it can only get rid of terrorism through mutual cooperation with Kabul," he said.

"If Pakistan decides today that the Taliban should sit and negotiate with the Afghan government, in my opinion, Pakistan can do make it happen," he said.
Last Update: Nov 14, 2014 4:33 pm