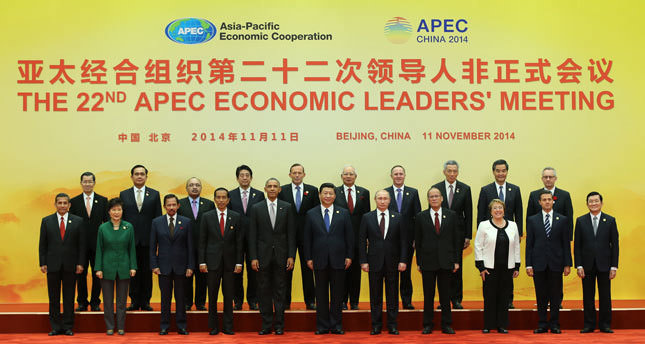 The APEC 2014 Forum drew attention from all over the world, as its 21 members account for approximately 55 percent of GDP and about 44 percent of world trade

One of the centerpieces of the APEC 2-14 Forum was the meeting between U.S. and Chinese leaders Barack Obama and Xi Jinping. Recently, there have been disagreements between China and the U.S. on issues such as cybercrimes, trade, and maritime disputes. Last November, China announced its air defense identification zone in the East China Sea. Washington accused Beijing of being aggressive in its territorial claims in the region. Beijing, on the other hand, demanded that the U.S. not interfere and reacted to the U.S.'s "containment strategy" against China by indicating Washington's plan to position 60 percent of its naval forces in the region as evidence. Nonetheless, at this very troubled moment, both sides have sought to build pragmatic cooperation. China came up with a new model of "major-country relationship" between China and the U.S. That is to say they focused on mutual benefits and positive-sum rather than cynicism, ideological conflicts, and zero-sum. Likewise, Obama said, "Beijing could be a partner in underwriting international order, not undermining it." Xi and Obama announced a historical agreement to cut hydrofluorocarbon emissions as a milestone in Sino-U.S. relations. Also, the new Bilateral Investment Treaty (BIT) is the biggest step forward for opening the Chinese market to American companies since China joined WTO in 2001, economists say. These are significant moves as Sino-U.S. relations at the time existed in a climate of growing friction, distrust, and rivalry. As for ideological conflicts, Obama urged China to stand up for human rights and freedom of press. Xi called on Obama to get familiar with Chinese history and the governing ideology of China. He said, "China and the U.S. have different national conditions, a different history and different cultures as well as different paths of development." Susan Shirk, a former China policy maker for the U.S. accused Xi of drawing a clear and hostile contrast between the Chinese system and Western political values, creating an ideological conflict war between Communist Party values and foreign values. Nonetheless, this is not an emerging phenomenon. Chinese leaders have argued that Western values would not fit into a Chinese context for decades. Jiang Zemin argued that the right to subsistence was the greatest human right in the Chinese context. Hu Jintao argued that China and the West were engaging in a cultural war and that is why China should increase cultural production because ideological and cultural fields were the two long-term infiltration areas Western hostiles focused on. Putting the ideological rhetoric aside, analysts say that the point was not to deliver much but to have a meeting between Obama and Xi. That is to say the results were beyond the expectations.

Xi and Japanese premier Shinzo Abe eventually held a long-awaited meeting at the forum. It was a major step because it was the first face-to-face discussion since both leaders took power two years ago. The deterioration of Sino-Japan relations worsened when the Japanese government nationalized the Diaoyu-Senkaku Islands. China and Japan are the second and third-largest economies in the world, respectively. Yet, according to Chinese government statistics, Japanese investments in China were nearly 50 percent lower compared to last year. Consequently, there was a certain amount of pressure applied to Abe's government by Japanese businessmen. Besides, the Xi government is much more powerful and confident ever since it took power, and the anti-corruption campaign is the biggest. So, it was the time for both leaders to tone down the nationalist rhetoric and improve diplomatic relations for the sake of better bilateral trade relations. As Abe's aides have been stating "even a handshake with Xi would be good handshake." The long-awaited breakthrough handshake happened at the forum even though it was a bit awkward and chilly at the beginning. This was not a symbolic gesture since China and Japan showed their willingness by releasing a document called the "Principled Agreement on Handling and Improving Bilateral Relations." It was an important effort to ease the tension in relations and to avoid contingency. It is reasonable to expect things will normalize gradually between China and Japan as the two leaders break the ice.