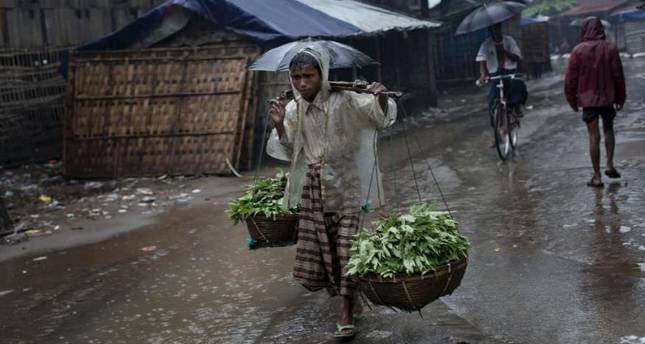 by Associated Press
Nov 19, 2014 12:00 am
The captain of the small fishing vessel has spent most of his life helping fellow Rohingya Muslims escape persecution and hatred in Myanmar, but now even he is worried about the panicked pace the exodus has taken in recent weeks. "Everyone is going now," Puton Nya said. "I'm afraid that soon, no one will be left." Bouts of vicious violence, together with discriminatory government policies, have sent an estimated 100,000 Rohingya fleeing Buddhist-majority Myanmar by boat in the last two years, according to the Arakan Project, which has been advocating on behalf of the minority Muslims for more than a decade. Director Chris Lewa said the pace is accelerating, with more than 15,000 people leaving since Oct. 15 twice the number that fled during the same period last year. Lewa believes heavy-handedness by soldiers and border guards in the northern tip of Rakhine state, where most of the estimated 1.3 million Rohingya live, has been "part of a campaign to create fear and to get them to leave." She said in the last two months: At least four Rohingya men were tortured to death. Security forces broke one of the victim's legs and burned his penis, Lewa said, and the pummeled body of another victim was found in a river. Young men have been grabbed off the streets and brutally beaten by border guards and soldiers without any clear explanation. One photo snapped by a cellphone shows a man after he was allegedly smashed with the butt of a gun in the jaw, cheekbone and stomach. More than 140 people have been arrested in two dozen villages on what Lewa said appeared to be trumped-up charges, ranging from immigration violations to alleged links with Islamic militants.

National Minister of Information Ye Htut did not immediately respond to the allegations. Rakhine state spokesman Win Myaing said no Rohingya have been forced to leave. "I don't know whether the number is increased or not. But if they want to leave, it's their decision to leave. That's nothing to do with us," Win Myaning said.

Denied citizenship by national law, Myanmar's Rohingya are effectively stateless, though historical records indicate some members of the ethnic group arrived in the country centuries ago. Many more arrived from neighboring Bangladesh in the 1900s when the country was under British rule. Almost all settled in Rakhine state, creating tensions with Buddhist residents who for generations considered it their duty to prevent an eastward Islamic spread into their nation and beyond.

Soon after Myanmar began transitioning from a half-century of dictatorship to democracy in 2011, newfound freedoms of expression fanned the flames of hatred. Violence by Buddhist mobs left up to 280 people dead most of them members of the religious minority and chased another 140,000 from their homes. They now live under apartheid-like conditions in camps outside Sittwe or in restricted villages. They cannot leave without paying hefty bribes to police and face constant threats of violence from Buddhist Rakhine neighbors. Often, their proximity to their old homes is "tantalizingly short," Hugo Slim of Oxford University said in a report for the United Nations Office for the Coordination of Humanitarian Affairs. Many are just a few hundred meters (yards) from the fields they used to till, the schools their children used to attend, and the communities that attacked them. Rohingya statewide have limited access to schooling and health care. Doctors Without Borders, their key medical provider, was expelled from Rakhine eight months ago after the government accused it of bias. The government said in July that the Nobel prize-winning group could return, but has yet to make good on its promise. Win Myaing, the Rakhine spokesman, said the organization will be allowed to return "soon," but offered no clear timeline.

U.S. President Barack Obama, U.N. Secretary-General Ban Ki-moon and several other leaders visiting Myanmar last week for a series of summits called on the government to solve the crisis. Authorities have put forward a "Rakhine Action Plan," but that also has drawn criticism. Under the plan, only those who can prove they lived in the country since 1948 can qualify for citizenship. It is impossible for most to fulfill the requirement, in part because few hold any documents. Those who don't comply would be classified as "Bengali," a term that implies they are illegal migrants and could subject them to internment camps and eventual deportation.