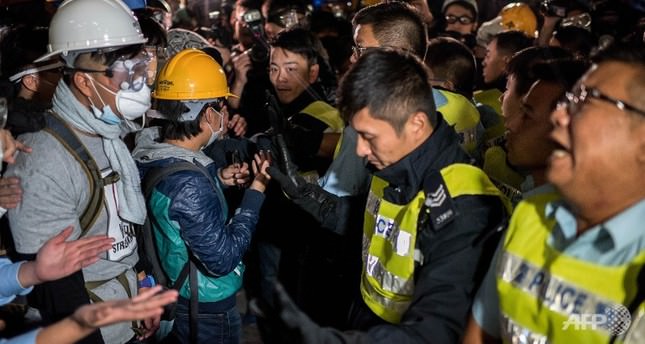 by reuters
Nov 20, 2014 12:00 am
A small group of Hong Kong pro-democracy protesters broke into the city's legislature via a side door early on Wednesday and police stopped others forcing their way in as tensions in the Chinese-controlled city escalated following a period of calm.

The flare-up came just hours after court bailiffs managed to clear part of a protest camp in the heart of the city that has been occupied by pro-democracy demonstrators for nearly two months, while leaving most of the main protest site intact. About 100 riot police with helmets, batons and shields stood guard outside the government building in the early hours of Wednesday, facing off with protesters who are demanding free elections for the city's next leader in 2017.

Four people, aged between 18 and 24, were arrested while three officers were treated in hospital for injuries, police said in a statement. The protest site was peaceful later in the morning, with just a handful of police on guard.

It was the first time protesters had broken into a key public building, defying the expectations of many political analysts who had predicted that Hong Kong's most tenacious and protracted protest movement would slowly wind down. A small group of protesters charged toward the legislature and used metal barricades and concrete tiles to ram a glass side door. They eventually smashed through, with several managing to get inside, witnesses said.

Scores of riot police, some with shields and helmets, rushed over, using pepper spray and batons to keep other demonstrators from also smashing their way in.

A democratic lawmaker at the scene, Fernando Cheung, said he and other protesters had tried to stop the activists from breaking through. "This is a very, very isolated incident. I think it's very unfortunate and this is something we don't want to see happen because the movement so far has been very peaceful," he said.

Hong Kong, a former British colony, returned to China in 1997 under a "one country, two systems" formula that gives the city more autonomy and freedom than the mainland, with an eventual goal of universal suffrage. The protesters are demanding open nominations in the city's next election for chief executive in 2017. Beijing has said it will allow a free vote, but only for pre-screened candidates.

On Tuesday, about 30 court bailiffs arrived at the 33-storey Citic Tower, also in the Admiralty district, to enforce an injunction forbidding street barricades. A similar injunction has been issued for a street in the gritty district of Mong Kok across the harbor.