Activist to drop “The Interview” to North Korea by balloon 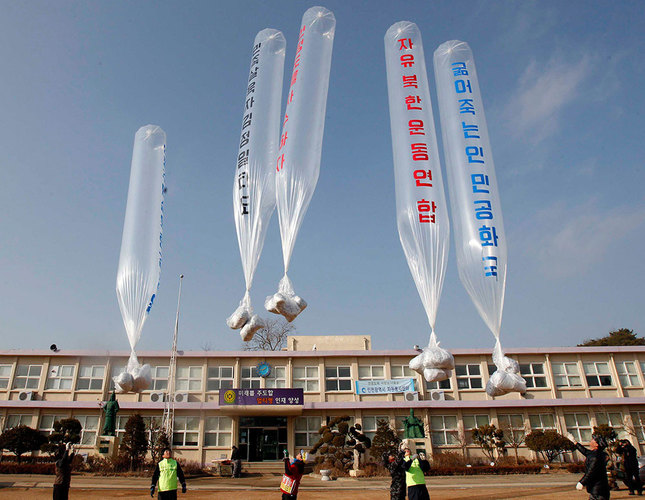 ,Starving North Korea, written balloons launched by former North Korean defectors and other activists to protest the shelling of Yeonpyeong Island in 2010 | Reuters
by Associated Press Dec 31, 2014 12:00 am

Sending propaganda items through balloons is a common practice to reach out to both sides of the world’s most heavily militarized border between North and South Korea, and a North Korean defector to the South plans to use this practice for “The Interview”, the movie that had recently escalated tensions between the U.S. and North Korea

A South Korean activist said Wednesday that he will launch balloons carrying DVDs of Sony's "The Interview" toward North Korea to try to break down a personality cult built around dictator Kim Jong Un.

The comedy depicting an assassination attempt on Kim is at the center of tension between North Korea and the U.S., with Washington blaming Pyongyang for crippling hacking attacks on Sony Entertainment. Pyongyang denies that and has vowed to retaliate.

Activist Park Sang-hak said he will start dropping 100,000 DVDs and USBs with the movie by balloon in North Korea as early as late January. Park, a North Korean defector, said he's partnering with the U.S.-based non-profit Human Rights Foundation, which is financing the making of the DVDs and USB memory sticks of the movie with Korean subtitles.

Park said foundation officials plan to visit South Korea around January 20 to hand over the DVDs and USBs, and that he and the officials will then try to float the first batch of the balloons if weather conditions allow.

"North Korea's absolute leadership will crumble if the idolization of leader Kim breaks down," Park said by telephone.

If carried out, the move is expected to enrage North Korea, which expressed anger over the movie. In October, the country opened fire at giant balloons carrying anti-Pyongyang propaganda leaflets floated across the border by South Korean activists, trigging an exchange of gunfire with South Korean troops.

But it is not clear how effective the plan will be, as only a small number of ordinary North Korean citizens are believed to own computers or DVD players. Many North Koreans would not probably risk watching the movie as they know they would get into trouble if caught. Owning a computer requires permission from the government and costs as much as three months' salary for the average worker, according to South Korean analysts.

Not everyone supports sending balloons into the North, with liberals and border town residents in South Korea urging the activists to stop. North Korea has long demanded that South Korea stop the activists, but Seoul refuses, citing freedom of speech.

Park said the ballooning will be done clandestinely, with the pace picking up in March when he expects the wind direction to become more favorable.

Calls to the Human Rights Foundation on Wednesday were not immediately answered. The foundation says on its website that it works with North Korean defectors to use hydrogen balloons to send material across the border, as well as smuggling items through China and broadcasting radio transmissions to reach those who own illegal short wave radios.