Search for MH370 continues as relatives of passengers mark anniversary 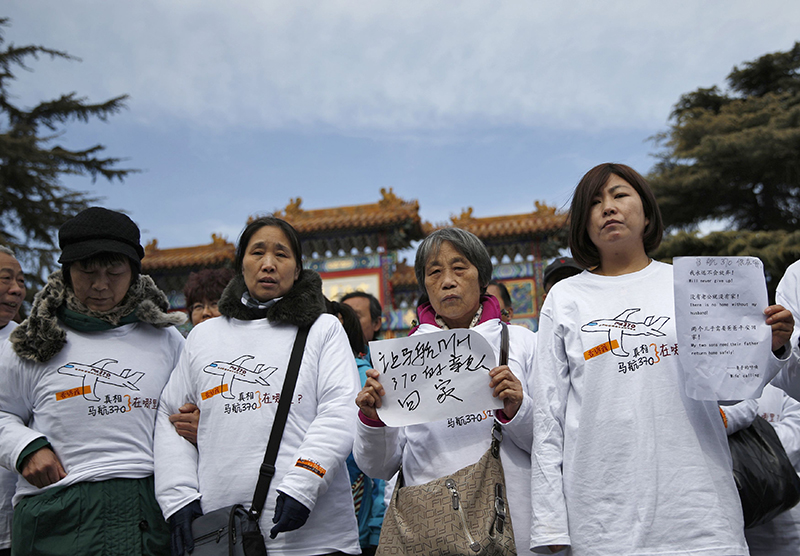 by Mar 08, 2015 12:00 am
Prime Minister Najib Razak said on Sunday that Malaysia remains committed to the search for the missing MH370 jetliner a year after it vanished without trace, and a report by international investigators has offered no new clues as to its fate.

A 584-page interim report into the disappearance of the Boeing 777-200ER provided details ranging from how radars had tracked the plane going off course to issues concerning the battery of the flight data recorder's underwater locator beacon.

However it did not identify a definitive cause for the disappearance, adding there was nothing suspicious in the financial, medical or personal histories of pilots or crew.

MH370 vanished from radar screens shortly after taking off from Kuala Lumpur, bound for Beijing, early on March 8 last year, becoming one of the greatest mysteries in aviation history.

Investigators believe the plane, carrying 227 passengers and 12 crew, was flown thousands of miles off course before eventually crashing into the ocean off Australia.

A search for the missing jetliner along a rugged 60,000 sq km patch of sea floor some 1,600 km west of the Australian city of Perth has found nothing so far. The search in this area, which experts believe is the plane's most likely resting place, will likely be finished by May.

"The disappearance of MH370 is without precedent, and so too is the search - by far the most complex and technically challenging in aviation history," Najib said in a statement.

"Together with our international partners, we have followed the little evidence that exists. Malaysia remains committed to the search, and hopeful that MH370 will be found," he said.

The investigation team led by Malaysia with experts from various countries including the United States, Britain, China, France and Australia confirmed in its interim report that MH370 was spotted making a turn-back by Malaysian primary radars operated by both the military and civil aviation authorities.

Thai radars also spotted MH370, but Bangkok's air traffic controllers "did not pay much attention" to the flight as it did not fall under Thailand's jurisdiction.

The Indonesian air traffic control radar in Medan, in the northern tip of Sumatra island, did not pick up MH370 "for unknown reasons".

The aircraft's transponder, which was switched off just before the aircraft made the turn-back, was "operating satisfactorily" until it was lost on the ATC screen, according to the report.

The investigation team found that battery powering MH370's flight data recorder's underwater locator beacon, which will send a signal if a crash occurs in the water, had expired in December 2012 and was not replaced. This was because the engineering department's computer system was not properly updated.

It also said there was nothing unusual in the way the pilots showed up for the flight, and that it was similar to their behaviour for past flights, according to CCTV video records.

Some of the relatives of those on board have been holding vigils this weekend to mark the anniversary.

In Beijing, police scuffled with some family members offering prayers at a temple as they tried to talk to foreign reporters.

"I can't sleep at night, each night I'm only getting about two hours, but I'm certain that my daughter is still alive and I'm going to get her back," said one mother, who did not give her name, before being escorted away.

Family members have previously described harassment by police, who are nervous about any threats to social stability.

The Chinese government, however, has said it would provide whatever help it can to the relatives and it offered its sympathies on the anniversary.

China's foreign minister said the search for the aircraft would not stop.

Australia's deputy prime minister said recently the search could not go on forever, and discussions were under way between Australia, China and Malaysia as to whether to call off it off soon.

Malaysia declared the disappearance of the flight an accident in January, clearing the way for the airline to pay compensation to victims' relatives.