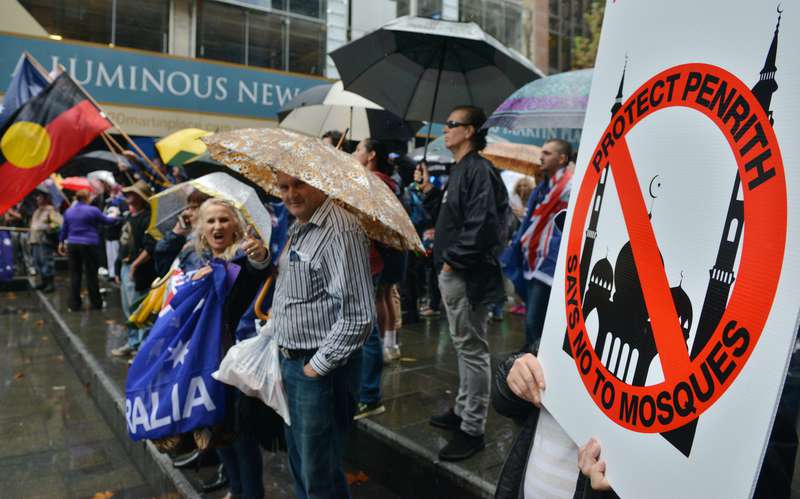 |AFP Photo
by Daily Sabah with Agencies Apr 04, 2015 12:00 am
Thousands of anti-Islam and anti-racism protesters clashed in angry rallies around Australia on Saturday.

The most violent clash was in Melbourne, Australia's second-largest city, where police struggled to separate 3,000 opposing demonstrators.

The Victoria state ambulance service treated four people, three for minor injuries from assaults in Melbourne, Ambulance Victoria spokesman Paul Bentley said. The fourth was treated for chest pains. None of the injured was taken to a hospital, he said.

Batty said the three were later released. She said all would be charged, but she could not detail those charges.

Reclaim Australia, an anti-Islam group, has organized rallies in 16 cities and towns around Australia.

The protesters argue against rights given to Muslims in Australia.

The group with racist tendencies were countered with anti-racism slogans by community groups that stand against racism and anti-immigration, including No Room for Racism, Socialist Alliance and Socialist Alternative.
Rival protester Gerard Morel said he opposed the anti-Islam rally because his grandfather had been victimized by Nazis during World War II.

ABC said Pauline Hanson, the former leader of the right-wing One Nation party addressed a crowd in Brisbane.

"I'm not a racist - criticism is not racism. I am a proud Australian fighting for our democracy, culture, and way of life," she was quoted as saying.

Hanson made international headlines in the late 1990s with an election campaign that was widely regarded as xenophobic.
Last Update: Apr 04, 2015 2:14 pm
RELATED TOPICS