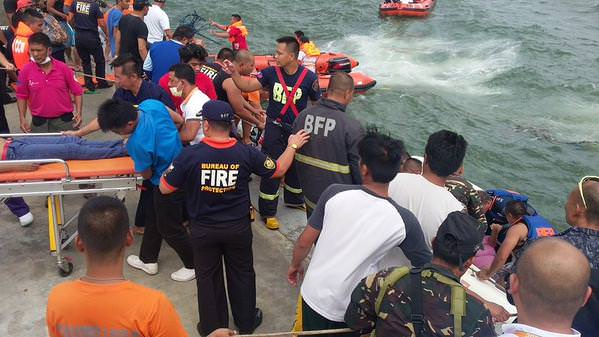 | Twitter Photo
by Jul 02, 2015 12:00 am
At least 36 people were killed after a passenger ferry with close to 200 people on board capsized in rough waters in the central Philippines on Thursday, officials said.

The Kim Nirvana was heading from the central city of Ormoc to the island of Camotes when it capsized.

Rescue boats picked up dozens of survivors who clung to the overturned hull of the vessel, one kilometre (about half a mile) from Ormoc port on Leyte island, Ciriaco Tolibao from the city's disaster risk reduction and management office told AFP.

Divers were scouring the murky waters searching for survivors from the inside of the ship, he said.

At least 53 survivors were brought to the hospital while more than two dozen others walked home after the mishap, he said.

Tolibao could not immediately say how many others were missing but a report on Manila radio said at least 21 people were unaccounted for.

The ship, which had 173 passengers and 16 crew on its manifest, overturned just 30 minutes after leaving the port after it encountered big waves, Tolibao said.

"We're scouring the ship for more survivors who may be trapped inside the hull," he said.

"We hope to finish the rescue before dark and before it starts to rain."

Leyte was ravaged by Super Typhoon Haiyan which struck in November 2013, leaving more than 7,350 people dead or missing.

The disaster-plagued Philippines is hit by about 20 typhoons and storms hit each year, many of them deadly.

Poorly-maintained, loosely-regulated ferries are the backbone of maritime travel in the sprawling archipelago.

But this has led to frequent accidents that have claimed hundreds of lives in recent years, including the world's worst peacetime maritime disaster in 1987 when the Dona Paz ferry collided with an oil tanker, leaving more than 4,300 dead.
Last Update: Jul 02, 2015 12:03 pm
RELATED TOPICS