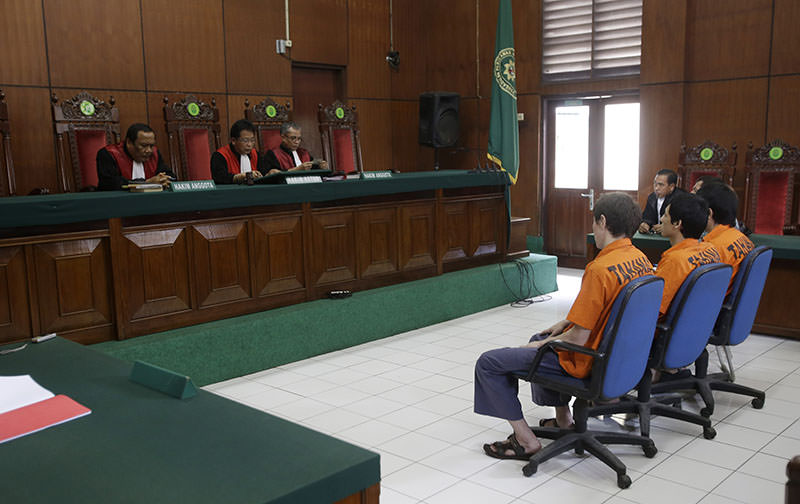 The court has sentenced the men believed to be members of Chinau2019s ethnic Uighur minority community to six years in jail for conspiring with Indonesian terrorists. (AP Photo)
by Anadolu Agency Jul 13, 2015 12:00 am
An Indonesian court on Monday sentenced three Uighur Muslims to six years in prison on charges of "terrorism" and immigration violations, according to local media.

The panel of judges in North Jakarta District Court found Ahmet Mahmud, 20, Abdulbasit Tuzer, 24, and Abdullah, 28- who also goes by the name of Altinci Bayyram - guilty of violating Indonesia's anti-terrorism and immigration laws, according to Indonesian website Detik.com.

The court ruled that they were from China's western Xinjiang region, and not Turkish nationals as their "fake passports" stated.

Turkey has linguistic and ethnic ties with the Uighur homeland of Xinjiang.

The men were also ordered to pay fines of Rp100 million ($7,500) per person, or spend an additional six months in prison.

Detik.com. reported the presiding judge, Hotman Lumban Tobing, as saying that the defendants would serve their time in Indonesia jails.

The judges stated that the three defendants entered Indonesia using fake Turkish passports with the intention of joining a group called the Indonesian Mujahidin.

The Mujahidin is reported to be led by Indonesia's most wanted terrorist, Abu Wardah Santoso.

Santoso is reported to have been linked to a number of attacks on police anti-terrorism squad Detachment 88, including the killing of at least six of its members.

"Their mission is to fight against people who are considered infidels in Indonesia with arms raised, including law enforcement officers," said presiding judge Tobing.

The four men were arrested in the village of Marantale, Moutong Parigi, Central Sulawesi, in Sept. 2014.

Accompanying them was another Uighur Muslim who is also charged with travelling on a false Turkish passport.

Ahmet Bozoglan - who police suspect of also being a Chinese citizen - will be sentenced 29 July.

He faces eight years in prison and a fine of Rp100 million on charges of "terrorism" and immigration violations.

Officials have been reported as saying that at the opening of their trial the men were asked to sing the Turkish national anthem.

The four men failed, thus further clarifying in the eyes of the court that they were not citizens of Turkey.
Last Update: Jul 13, 2015 6:56 pm
RELATED TOPICS