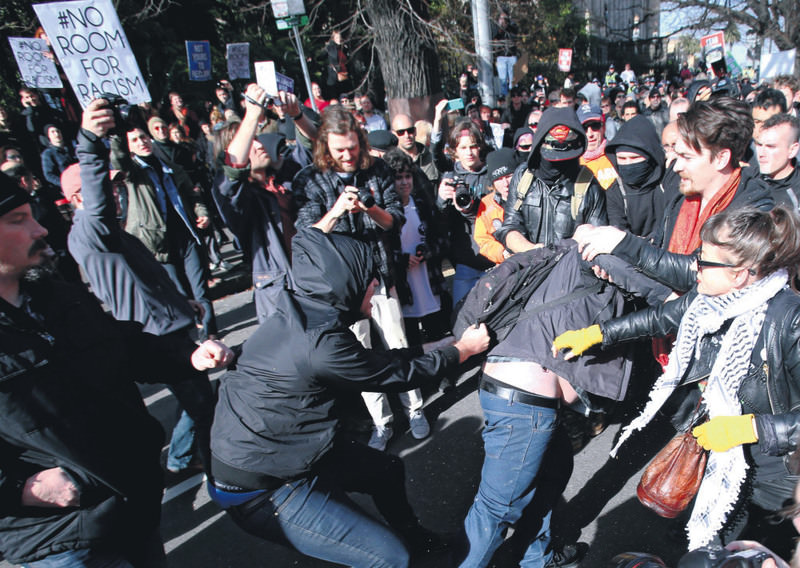 Protesters clash during a protest between far-right group United Patriots and anti-racism protesters in Melbourne, Australia.
by Daily Sabah with Agencies Jul 19, 2015 12:00 am

Amid rising Islamophobia and xenophobia in Europe and around the world, Australian streets witnessed another series of anti-Islam rallies with anti-racism groups confronting them

Anti-Islam and anti-racism groups clashed on Australian streets for a second day on Sunday as rolling rallies continued across the country. On the streets of Canberra, Sydney, Perth, Brisbane and many other places, anti-racism protesters again confronted anti-Islam right-wing groups as police officers mounted a strong presence in cities to keep the two sides apart.

Around 200 members of the anti-Islam and anti-immigration protesters from the Reclaim Australia and United Patriots Front groups waved the Australian flag and yelled chants at a rally in Sydney on Sunday with signs declaring "Say no to Sharia" and "Immigration is the elephant in the room." They were met by around 250 counter-demonstrators who carried banners that said: "No racism, no Islamophobia". Police, including riot squad officers and mounted units, packed Martin Place in the heart of Sydney's central business district to separate the rival groups.

Mel Gregson, organizer for the anti-racism group, No Room for Racism, told Anadolu Agency (AA) that the message that they are trying to get across is that with racism and Islamophobia on the rise "it's becoming dangerous, and not only for Muslims, but all minority groups." Anti-racism activists told AA that police in Melbourne exhibited "brute force" and that pepper spray was sprayed indiscriminately into the crowd. More than 100 people needed to be treated. Five people were arrested at the Sydney demonstrations, a New South Wales state police spokesman told Agence France-Presse, with two expected to be charged. There were some brief scuffles but no sign of the violence seen in Melbourne on Saturday, where police had to use pepper spray to subdue protesters.

Former politician Pauline Hanson, who rose to prominence in the 1990s as head of the right-wing, anti-immigration party she co-founded, told a rally in Rockhampton in central Queensland she was "against the spread of Islam," the ABC reported. There were also opposing rallies in the capital Canberra, western city of Perth and Hobart on Tasmania, with the anti-racism protests attracting the same number of participants or more. More than a dozen Reclaim Australia rallies were also scheduled around the country on Sunday, including one at which a member of Prime Minister Tony Abbott's government will speak in Queensland.

In April, thousands of anti-Islam and anti-racism protesters clashed in angry rallies around Australia. The most violent clash in April was in Melbourne, Australia's second-largest city, where police struggled to separate 3,000 opposing demonstrators. The group with racist tendencies was again countered with anti-racism slogans by community groups that stand against racism and anti-immigration, including No Room for Racism, Socialist Alliance and Socialist Alternative. Reclaim Australia, an anti-Islam group, had organized rallies in 16 cities and towns around Australia.

In recent years, Islamophobia and xenophobic sentiments have been increasing in Europe and around the world with racially motivated attacks on mosques in several European cities and large demonstrations against the Muslim population. European attitudes toward minorities living in the EU have shown that there are considerable negative perceptions of minorities. The negative attitudes are more common among people on the ideological right, paving the way for growing concerns of far-right extremism and Islamophobia in Europe. Anti-Muslim demonstrations, especially in Germany, have turned Muslims and immigrants into a target. Founded in October 2014, the Dresden-based anti-Islam movement, Patriotic Europeans Against the Islamisation of the West (PEGIDA), carried out several anti-Islam demonstrations, including weekly rallies organized by far-right groups in Dresden.

Ayhan Küçük, the head of the International Center for Watching Violation of Rights (UHİM), said in May that that the popularity of racist political speech has helped racist and xenophobic political parties emerge in several European countries like Austria, Italy and the Netherlands and that thousands of acts of violence happen in Europe that result in casualties. Saying that the media and politicians manipulate people's perceptions of Islam with terrorist groups like the Islamic State of Iraq and al-Sham (ISIS) and the 9/11 terrorist attacks, Küçük warned this manipulation results in a serious increase in hate crimes. In addition, the rise of Islamophobia and xenophobia across Europe has also revealed that the multicultural and pluralist nature of the European Union was already damaged as no strong sanctions imposed by the EU is sufficient enough to halt widespread hatred for the Muslim community and immigrants living in different European cities.
Last Update: Jul 19, 2015 8:30 pm
RELATED TOPICS