Over 200,000 affected by Super Typhoon Koppu in Philippines 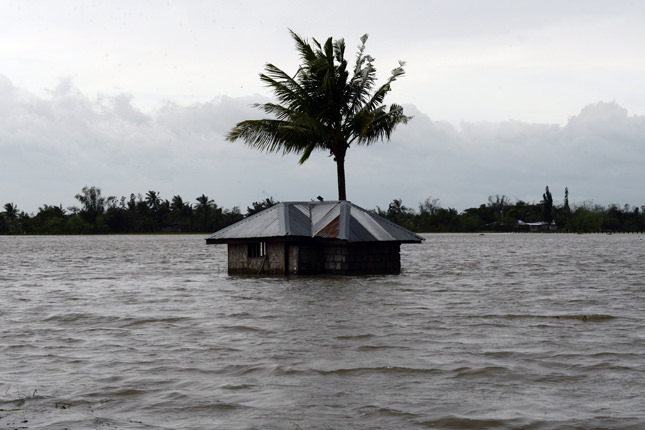 by Anadolu Agency
Oct 19, 2015 12:00 am
More than 200,000 people have been affected by a typhoon that has knocked out power and triggered landslides and floods while sweeping cross the northern Philippines, according to authorities.

The Department of Social Welfare and Development (DSWD) said that some 203,267 people, or 42,097 families, were affected by Typhoon Koppu -- locally known as "Lando" -- on the populous island of Luzon as of Monday morning.

There were also reports of the death toll increasing, with the state-run Philippine News Agency citing police as saying that a man was confirmed dead in the mountainous region of Cordillera while another remained missing.

Supt. Cherry Fajardo, Cordillera Regional Police Office spokesperson, said in a text message that a victim identified as Lando Lazo was killed in a landslide in Benguet province amid heavy rains and strong winds.

The National Disaster Risk Reduction and Management Council had earlier identified two other victims as a 14-year-old boy whose house was crushed by a tree in Quezon City in Metro Manila, and a 62-year-old who died when a wall collapsed in western Zambales province.

Meanwhile, Nueva Ecija province's governor Aurelio Umali had told ABS-CBN News that two people were reportedly killed in central Palayan city Sunday but had yet to be identified.

The archipelago's north has been experiencing heavy rainfall since Koppu made landfall Sunday. It is forecast to linger over the region over coming days due to another typhoon called "Champi" to the east and a high pressure area to the north.

The storm is expected to be in the vicinity of Claveria, the northernmost town in Luzon, Tuesday morning.

Dinky Soliman, DSWD secretary, told reporters in Manila on Monday that 12,207 families -- or 59,159 people -- are currently also being served outside evacuation centers.

More than 300 houses have reportedly been damaged across the island, according to the department.

Meanwhile, seven people were confirmed dead while two others remained missing Monday after a boat with more than 40 people on board capsized amid strong waves in the central Western Visayas region.

Rosario Cabrera, director of the Office of Civil Defense in Western Visayas, declined to address whether Sunday's incident -- in which the boat was supposed to travel from Iloilo city and to nearby Guimaras island -- was related to Koppu.

While the area had not been hit by Koppu, the typhoon's 650-kilometer (404-mile) cloud radius may have contributed to stormy conditions in the region, according to the Philippine News Agency.

Koppu is the 24th named storm of 2015 in the northwest Pacific Ocean and the 15th to reach typhoon strength.

The Philippines suffers around 20 typhoons and storms each year, many of them deadly.

In 2013, Typhoon Haiyan -- one of the strongest tropical cyclones ever recorded -- struck the country's central islands, leaving more than 8,000 people dead, missing and injured.