Massive outrage in Kabul over beheading of Shiite Hazaras 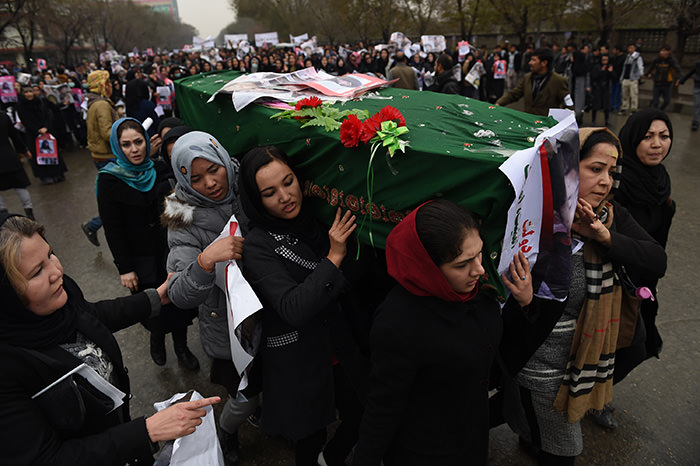 Afghan protesters carry a coffin containing a decapitated body of one of seven Shiite Muslim Hazaras, during a demonstration in Kabul on November 11, 2015 (AFP Photo)
by Nov 11, 2015 12:00 am
Thousands of protesters marched coffins containing the decapitated bodies of seven Shiite Hazaras through the Afghan capital Kabul Wednesday to demand justice for the gruesome beheadings, which the United Nations say may be considered a war crime.

Demonstrators gathered in west Kabul and walked through the rain bearing the coffins draped in green to the gates of the presidential palace, where organizers said they were planning to stage a sit-in until their demands were met by the government.

The marchers also carried pictures of the victims, including two women and one child - a girl, whose coffin was carried by grieving women.

"We want revenge, today they kill us, tomorrow they kill you," the protesters chanted.

The circumstances surrounding the beheadings remain unclear. The bodies of the seven victims, who are believed to have been held hostage by unknown gunmen for months, were found on Saturday in Zabul province, where fighting between rival Taliban groups has escalated over recent days.

"The people are asking why the government has been indifferent towards these crimes, people are demanding the resignation of the heads of the government because they have been inefficient and corrupt and never address the demands of the people," Jawad Sultani, a university lecturer at the protests said.

"Ashraf Ghani, we want answers," a woman protester shouted through a loudspeaker.

The protest came as the United Nations followed the Afghan government and the US in condemning the killings, suggesting they may have been a war crime.

"These senseless murders may amount to war crimes and the perpetrators must be held accountable," Nicholas Haysom, the UN's Special Representative for Afghanistan, said in a statement Wednesday.

Some local officials have attributed the macabre killings to ISIS sympathizers while the Taliban has also been blamed, however the government does not have control of the area and the claims could not be verified.

Afghanistan's intelligence agency on Tuesday rejected the suggestion that ISIS affiliates were responsible, saying that the southern province has been the scene of deadly clashes between rival Taliban factions for days.

The protesters in Kabul chanted death slogans to the Taliban and ISIS.

The bodies of the seven victims were first taken to their home province of Ghazni, where protests were also held Tuesday, with demonstrators bearing the coffins of the dead marching to the provincial governor's compound.

The bodies were then driven to Kabul late Tuesday, where they were greeted by hundreds of mourners carrying candles before beginning their march early Wednesday.

The three million-strong Afghan Hazara community has been persecuted for decades, with thousands killed in the late 1990s by Al-Qaeda and the mainly Pashtun Taliban.

There has been an upsurge in violence against the mostly-Shiite Hazara this year, with a series of kidnappings and killings that have triggered a wave of fury on social media.

Yesterday the Afghan spy agency said its forces had freed eight other Hazaras who had been held hostage for months, but offered no further details.

Afghanistan's ethnic groups include Tajiks, Uzbeks, Hazaras and Turkmen, who mainly live in the north, west and central areas of the country, while Pashtuns -- the largest ethnic group -- dominate the south and east.
Last Update: Nov 11, 2015 12:43 pm
RELATED TOPICS