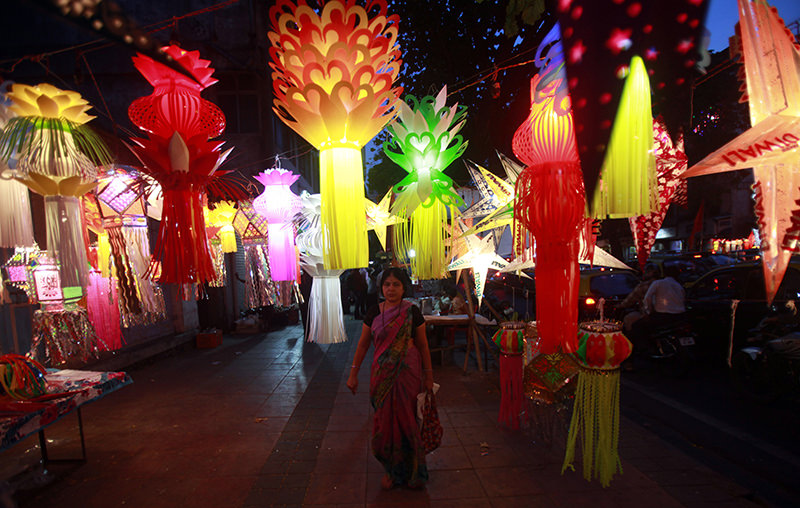 | AA Photo
by Nov 11, 2015 12:00 am
The Indian government issued a health warning for the national capital Tuesday saying pollution levels were expected to be very high during Diwali, the Hindu festival of lights, and the elderly should stay indoors.

Diwali falls on Wednesday this year. Homes are lit with oil lamps, candles, electric fairy lights and children burst firecrackers to celebrate the day that marks triumph of good over evil.

Pollution levels in Delhi have been touching dangerous levels for the past 10 days with the burning of paddy crop residue in nearby farming regions adding to pollution levels already made high by heavy traffic movement.

A bulletin from the federal Ministry of Earth Sciences said if the same number of firecrackers were burnt in the city on Diwali as the previous year and there was no rainfall the levels of pollution were expected to shoot up.

The World Health Organization recommends that people are not exposed to PM2.5 level of 25 micrograms over any 24-hour period, due to the ability of the small particles to get deep into the lungs and even the bloodstream.

The expected daily average level of pollution would be severe for human health, the ministry warned.

"Everyone should avoid all physical activity outdoors; people with heart or lung disease, older adults, and children should remain indoors and keep activity levels low," the advisory said.

Air pollution in the city accounted for 10,000 to 30,000 deaths annually, according to a publication of the Delhi-based non-profit Centre for Science and Environment (CSE).

"In India, we burn more than 40 recognised and other dangerous forms of firecrackers, one louder than the other and all of them releasing toxic fumes into the dense winter air," the CSE said.

"The situation worsens with vehicular pollution and smoke from open burning. Calm and cool weather blocks the dispersal of smoke and pollutants, giving rise to stubborn and toxic smog."

Parents of three toddlers living in the Indian capital approached the Supreme Court in September seeking a ban on firecrackers during festivals, saying their children had a right to be brought up in a pollution-free environment.

The court refused to issue a ban and said the government had failed to give wide publicity to the ill effects of exploding crackers.

Every year, 620,000 premature deaths occur in India from air pollution-related diseases, according to the World Health Organization.
Last Update: Nov 11, 2015 8:19 am
RELATED TOPICS