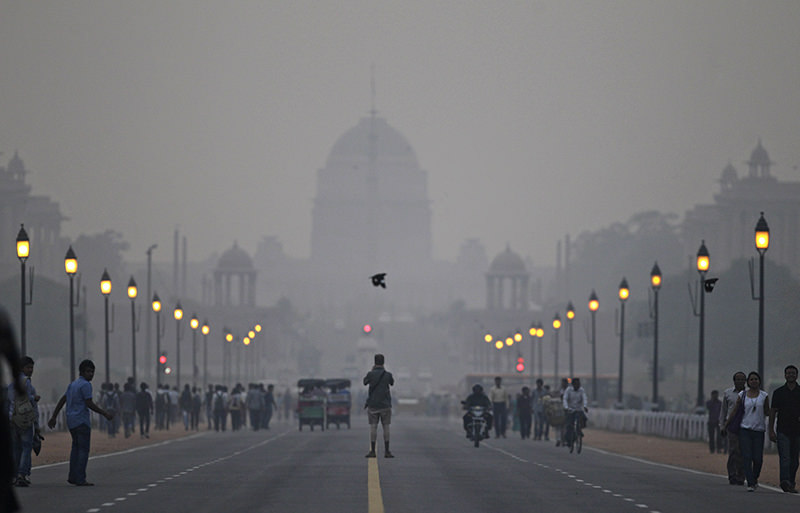 In this Nov. 3, 2012 file photo, a tourist stands in the middle of a street in front of the Presidential Palace enveloped in a blanket of smog, caused by a mixture of pollution and fog, in New Delhi (AP Photo)
by Dec 07, 2015 12:00 am
India's chief justice has backed a plan to restrict cars on Delhi's roads and said he would be prepared to take the bus to work, calling on other judges to join, as the world's most polluted capital tries to clean up its filthy air.

The Delhi government announced last week it would allow cars on the roads only on alternate days from January 1, as it tries to reduce the choking smog, which worsens during winter months as the colder air traps pollutants.

Justice TS Thakur said everyone had to do their bit to tackle the crisis, caused partly by millions of cars piling onto the city's congested roads every day.

"There is no difficulty in this. I think this is the bare minimum which we can do," Thakur said of the scheme, which would allow private cars on the roads only on alternate days according to their licence plate numbers.

"People call it sacrifice. This (is) not a sacrifice, this is symbolic to show that judges are doing it," he said on Sunday, according to the Press Trust of India.

Asked whether judges could therefore car pool to work Thakur, who was sworn in as chief justice earlier this month, replied:

"If a judge can pool cars, it sends a message to the people that we have no problem. We can walk or even take a bus," he was quoted by The Hindu newspaper saying.

Environmental groups have welcomed the Delhi government's plan for private vehicles but have said it will be tough to implement.

Delhi Chief Minister Arvind Kejriwal said Saturday the measure would initially be introduced for only a few weeks, and could be withdrawn altogether if it proved problematic.

Successive Delhi governments have faced flak for failing to clean up the filthy air, ranked as the worst in the world in a World Health Organization survey of more than 1,600 cities.

Several Chinese cities have slapped limits on car numbers because of congestion and pollution, but it is the first time the Indian capital has implemented such a measure.

The issue has been in the spotlight this week as negotiators from 195 nations haggle in Paris over a planned universal accord to slash the greenhouse-gas emissions that trap the sun's heat.
Last Update: Dec 07, 2015 9:13 am
RELATED TOPICS