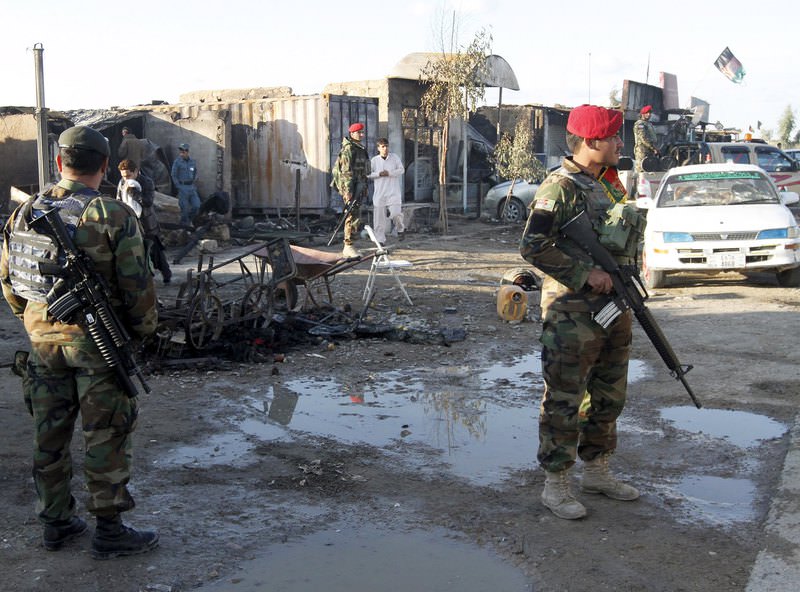 Nearly 24 hours after the siege began, one of the 11 assailants was still holding out against security forces late on Wednesday, in the most serious attack on the largest military installation in the south of the country in 14 years of war.

Witnesses said the militants had taken families hostage, using them as "human shields" after storming the sprawling complex, and slowing down the military's clearance operation.

"The fighting started around 6:00 pm (Tuesday) and intensified over the night," 30-year-old university student Izatullah, who lives inside the complex, told AFP.

"Soldiers were calling on Taliban attackers to let women and children go, but the attackers declined. We could hear children screaming during the fighting."

The Afghan defence ministry on Wednesday evening said nine insurgents had been gunned down, one was injured and another was still holed up inside a building.

"Unfortunately during the battle, 37 innocent Afghans were killed and 35 others injured," the ministry added.

It did not offer any breakdown of the casualties, but a Western official briefed on the matter told AFP that it included a large number of civilians.

"This is the most serious attack we've witnessed against the (Kandahar) complex", which also houses a joint NATO-Afghan base, the official said.

The militants managed to breach the first gate of the high-security air field and took up position in an old school building, engaging security forces in fierce firefights.

The Taliban posted a picture on their website of the militants it said were involved in the brazen attack. It shows 10 young men sporting trimmed beards, Kalashnikovs and identical military uniforms.

The face of one of them is obscured with blue ink for reasons that were not revealed.

"The martyrdom seekers... entered Kandahar airbase undetected... and began thunderous attacks," the post said.
It claimed the assailants reported via telephone that some 80 Afghan and foreign forces had been killed and 13 armoured carriers destroyed. The insurgents are regularly known to exaggerate battlefield claims.

The raid coincides with Afghan President Ghani's high-profile visit to Islamabad on Wednesday for the Heart of Asia conference aimed at promoting regional ties.

Ghani and Pakistani Prime Minister Nawaz Sharif vowed their commitment to the peace process on Wednesday on the final day of the conference, with the United States also offering support, the foreign ministry in Islamabad said.

Ghani's willingness to visit Afghanistan's longtime nemesis has signalled a renewed push to mend badly frayed cross-border ties, which could help jumpstart peace talks with the insurgents.
"It has become a familiar pattern. Whenever there is talk about peace talks, the Taliban launch big attacks," Kabul-based military analyst Atiqullah Amarkhil told AFP.

"It shows that either they want to scuttle efforts towards talks or want big concessions before they reach the negotiating table."
Pakistan hosted a milestone first round of peace negotiations in July.

But the talks stalled when the Taliban belatedly confirmed the death of longtime leader Mullah Omar, sparking a power struggle within the movement that lead to a rival faction splitting off last month.

The Kandahar raid comes after days of fevered speculation about the fate of new Taliban leader Mullah Akhtar Mansour following reports he was critically wounded in a firefight with his own commanders in Pakistan.

The militants released an audio message Saturday purportedly from Mansour, vehemently rejecting reports of any shootout as "enemy propaganda".

Taliban's denials have fallen on sceptical ears, however, especially after they kept Mullah Omar's death secret for two years, with multiple insurgent sources casting doubt on the authenticity of the message.

Ghani also said Monday that there was no evidence to prove that Mansour was dead.

Rumours of his demise could potentially intensify the simmering rifts within the insurgent movement.

The Taliban has seen a resurgence in recent months, opening new battlefronts across the country with Afghan forces struggling to rein in the expanding insurgency.
Last Update: Dec 10, 2015 1:56 am
RELATED TOPICS