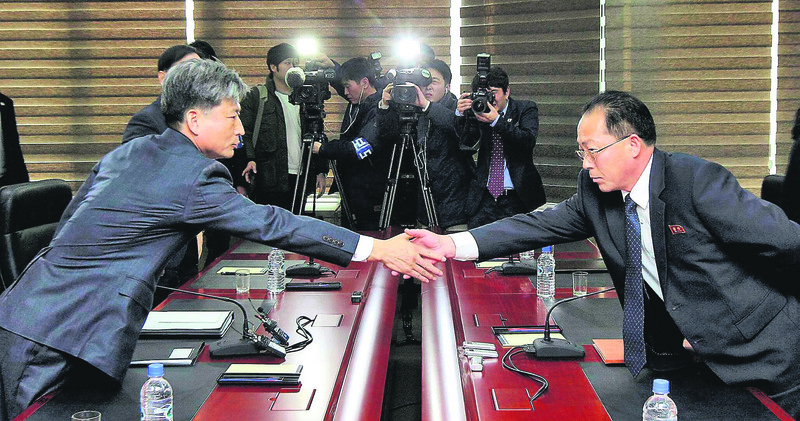 by Compiled from Wire Services Dec 12, 2015 12:00 am
Senior officials from North and South Korea met for talks on Friday to discuss improving ties and resuming cooperation projects, like cross-border tours, stalled amid tensions that have remained high for nearly six years. South Korean Vice Unification Minister Hwang Boogi met with the North's Jon Jong Su, a vice director of the Committee for the Peaceful Reunification of Korea, at the jointly-run Kaesong industrial zone a few miles north of their border. The meeting was the first forum for high-level discussions over a range of issues following an agreement in August that ended an armed standoff involving an exchange of artillery fire across their border. The North was expected to seek the resumption of cross-border tours from the South to its Mount Kumgang resort, a once-lucrative source of cash for the impoverished state that was suspended in 2008. Seoul in turn was expected to try to get Pyongyang to agree to hold reunions of war-separated families on a regular basis, a top humanitarian priority for the South, where more than 60,000 mostly elderly people are looking for relatives in the North. "Between South and North, there are many issues to discuss and resolve. We will do our best to work them out step by step," Hwang, the chief South Korean delegate, told reporters before boarding a bus to cross a land border into Kaesong.

The rivals, technically still at war after their 1950-53 conflict ended in a truce, not a treaty, had all but cut ties since early 2010, when a South Korean navy ship was sunk by a torpedo that Seoul said was fired from a North Korean submarine. Pyongyang denies any involvement.

The talks come a day after North Korean leader Kim Jong Un appeared to claim that his country had developed a hydrogen bomb, which is more powerful than an atomic bomb, although experts and U.S. and South Korean officials expressed doubt that the North has such capability.

Analysts say quick improvements in ties are unlikely because the rivals remain far apart on major issues, such as Pyongyang's nuclear weapons ambitions and the broad economic sanctions the South has imposed on the North since 2010, when Seoul blamed a North Korean torpedo for a warship sinking that killed 46 South Koreans. Improving relations with Seoul is a priority for young North Korean leader Kim Jong Un, who likely wants tangible diplomatic and economic achievements before a convention of the ruling Workers' Party in May, said Koh Yu-hwan, a North Korea expert at Seoul's Dongguk University.

The agenda for Friday's talks was "issues that will improve ties" between the North and the South, according to the South Korean government. Inter-Korean ties are often measured in terms of commercial exchanges and joint projects. The industrial zone in Kaesong, founded in 2002, is the last remaining major joint project to result from an earlier period of improved ties. It is widely expected that Kim will use the congress, the party's first since 1980, to announce major state polices and shake up the country's political elite to further consolidate his power. The Korean Peninsula remains technically at war, because the Korean War ended with an armistice, not a peace treaty.
RELATED TOPICS