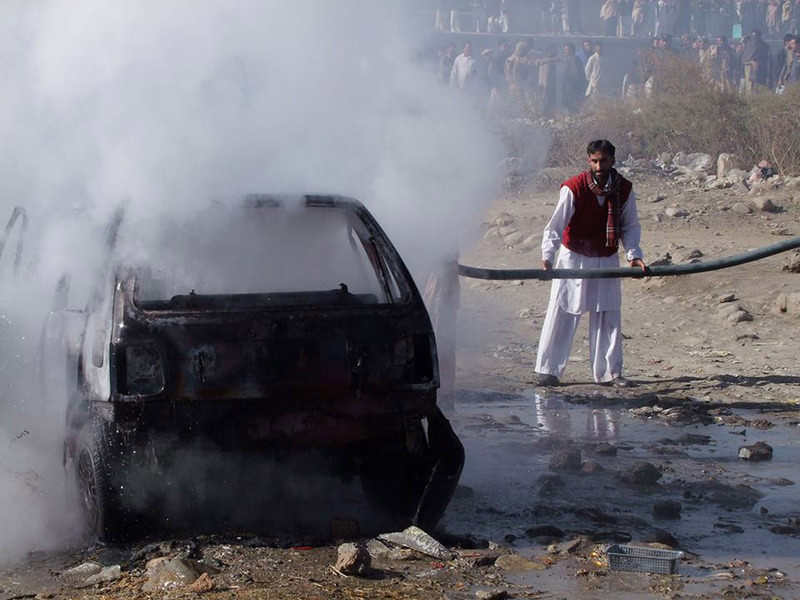 Pakistani firefighters extinguish a fire in a vechile at the site of a bomb explosion at a market in Parachinar, on Dec 13, 2015. (AFP Photo)
by Dec 13, 2015 12:00 am
A blast killed 24 people and injured 70 in the northwestern Pakistani city of Parachinar on Sunday, officials said, and a banned extremist group claimed responsibility for the attack.

"This is revenge for the killing of Muslims by the Syrian president and Iran," said Ali bin Sufyan, spokesman for Lashkar-e-Jhangvi (LeJ), an extremist group whose sectarian ideology is closely aligned with the Daesh terrorist organization. He was speaking to Reuters by phone.

Earlier this week Reuters reported that a Shi'ite unit of Pakistani fighters known as the Zeinabiyoun were joining the war against Deash in Syria. Many come from Parachinar, which has a large Shi'ite population.

Regional sources said there were hundreds of Pakistanis fighting in Syria.

Sufyan said Parachinar residents should not travel to Iran or Syria to fight in the war there on behalf of the Shi'ites.

The explicit linkage of the Pakistan bombing to the war in Syria will alarm Pakistani officials, who are keen to play down reports that Daesh is seeking to establish a foothold in their country.

A couple of small militant groups who splintered from the Pakistani Taliban pledged allegiance to Daesh, but they have not had much impact.

But across the border in Afghanistan, militants who split from the Taliban and pledged allegiance to Daesh have established training camps, taken over territory and clashed with the Taliban.

The LeJ had once enjoyed the open support of Pakistan's powerful spy agency, the Directorate for Inter-Services Intelligence, but the group suffered a series of setbacks this year.

The leader of LeJ, his two sons and several top officials were shot dead in police custody this July; police say they were trying to escape. Last month another top LeJ commander was shot by police while in custody.

But Sunday's bombing, if carried out by the LeJ, is proof that the group can still mount
devastating attacks.

"The death toll has reached 24 and 70 are wounded," said Amjad Ali Khan, the political head of Kurram Agency. Parachinar is the capital of Kurram. ‎

"Some of the injured are in critical condition," said Shafiq Hussain, a health worker at the Agency Headquarters Hospital Parachinar.