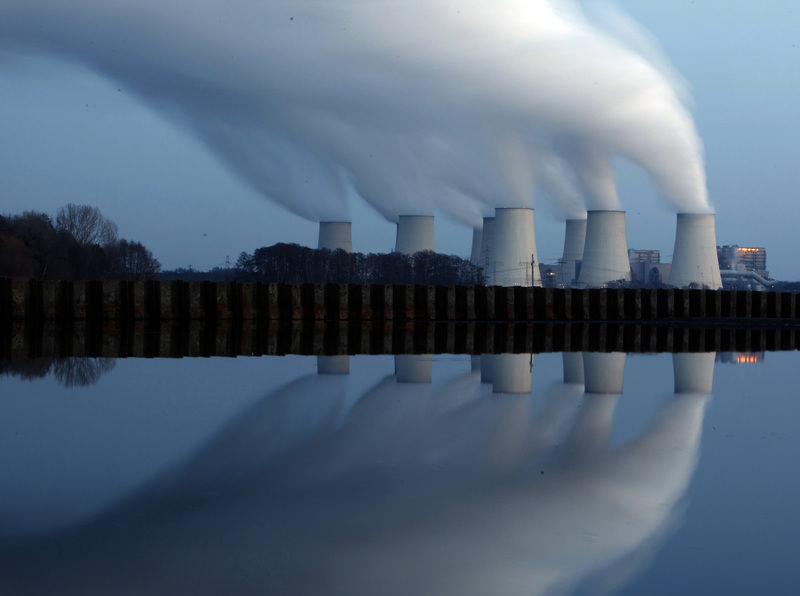 File photo of steam billowing from the cooling towers of Vattenfall's Jaenschwalde brown coal power station, Germany Dec 2, 2009. (REUTERS Photo)
by Dec 15, 2015 12:00 am
Less than a week since signing the global climate deal in Paris, Japan and South Korea are pressing ahead with plans to open scores of new coal-fired power plants, casting doubt on the strength of their commitment to cutting CO2 emissions.

Even as many of the world's rich nations seek to phase out the use of coal, Asia's two most developed economies are burning more than ever and plan to add at least 60 new coal-fired power plants over the next 10 years.

Officials at both countries' energy ministries said those plans were unchanged.

Japan, in particular, has been criticised for its lack of ambition - its 18-percent target for emissions cuts from 1990 to 2030 is less than half of Europe's - and questions have been raised about its ability to deliver, since the target relies on atomic energy, which is very unpopular after the 2011 disaster at the Fukushima nuclear plant.

"It will not be easy to change the dynamic for domestic coal use, but I think Japan cannot continue ignoring this," said Kimiko Hirata, international director at Kiko Network, a Japanese NGO that lobbies for measures to combat climate change.

"Eventually Japanese businesses will start recognising the meaning of emissions neutrality and the rapid shift to renewables in other countries and start responding," said Hirata, who attended the Paris negotiations.

Analysts say Japan and South Korea could reduce carbon emissions by much more than they pledged in Paris.

"The focus in Asia has been more on China and India, so we haven't seen much attempt to put pressure on Japan and South Korea yet. But I imagine pressure will start to increase," said senior analyst Georgina Hayden at BMI Research, a unit of ratings agency Fitch Group.

South Korea did scrap plans for four coal-fired power plants as part of its pledge to the Paris summit, but 20 new plants are still planned by 2021.

In Japan, 41 new coal-fired power plants are planned over the next decade, and taxes favour imports of coal over cleaner-burning natural gas.

In South Korea, tax on imported coal for power generation was raised in July, but is still only just over a third of the import tax on natural gas.

Coal-fired power plants there currently run at about 80 percent of capacity, compared with 35-40 percent for gas plants, according to calculations based on data from Korea Electric Power Corp (KEPCO), the country's largest power utility.

When asked if the Paris agreement could lead the Korean government to reduce the planned number of coal-fired plants, an energy ministry spokesman declined to comment, but a ministry official with direct knowledge of the matter said on condition of anonymity that there was no change in the offing.

Japan's environment ministry also declined to comment, but an official said, anonymously, that the Paris climate deal would have no impact on the ministry's assessments of coal plants.

"Our stance on new coal plants is unchanged," a spokesman said, adding that emissions would be cut as ageing coal plants were replaced by new ones using the latest technology.

Mutsuyoshi Nishimura, a former climate negotiator for Japan, said Japanese industry and the government had been caught napping by the Paris agreement and were "awfully reluctant to visualise the coming of the 'non-fossil world'".

"They were too caught up in the belief that industrialisation and economic growth would entail such huge CO2 emissions in developing countries that China, India etc. would oppose any notion of decarbonisation," he said.

To be sure, China uses vastly more coal and has nearly a thousand more such plants in various stages of planning and construction.

But it has also recently reformed its gas price system to encourage a switch away from coal.

"We haven't seen that kind of commitment from Japan or South Korea yet," said BMI's Hayden.