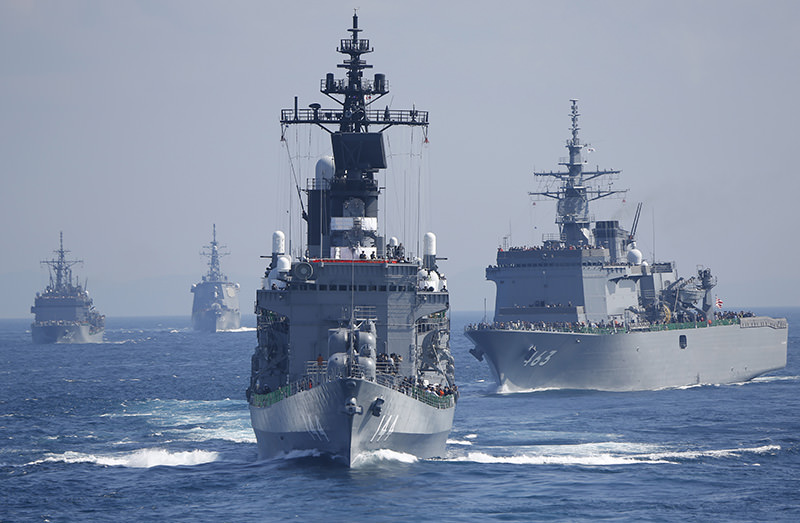 by Anadolu Agency Dec 24, 2015 12:00 am
Japan's cabinet approved Thursday a record defense budget of around $42 billion for the 2016 fiscal year, as part of efforts to boost the country's defense capacity amid tensions over the region's seas.

Kyodo news agency reported that the move marks a 1.5 percent increase of the initial budget for fiscal year 2015, in line with the government's objective of enhancing "security around the Nansei Islands chain covering Okinawa and the Japanese-administered Senkaku Islands in the face of an increasingly assertive China."

The 5.05 trillion yen budget approval-the fourth annual increase -- comes amid ongoing disputes between China and other Asian countries laying claim to islands and waters of the East and South China seas.

It also follows the Japanese legislature's passage of security bills that will see the country expand the scope of operations by its troops overseas after a reinterpretation of its pacifist post-World War II constitution.

According to Kyodo, the budget for the year starting in April will cover military equipment for expanded overseas operations to be used by the Self-Defense Forces once the new security laws-permitting the defense of allies under armed attack -- are implemented in March.

They include an E-2D early warning plane that can track missiles targeting U.S. vessels near Japan and a KC-46A aerial refueling tanker that can contribute to more comprehensive logistic support for U.S. forces.

Of the budget, around $1.5 billion will be spent on the realignment of U.S. forces in the country, with nearly a third set aside for the relocation of an air station in Okinawa-an issue that has drawn opposition from residents and local authorities.

Last year, Abe cabinet's decided to re-interpret the constitution to allow for "collective defense," defined as being able to come to the assistance of formal allies, such as the U.S. and "close partners".

The new security laws, whose passage put the decision into law last September, remove geographical restraints on military cooperation in the Western Pacific Ocean, in conjunction with new guidelines for U.S.-Japan cooperation.

Japan and the U.S. have been expressing alarm at China's maritime expansion, which they suspect is aimed at extending its military reach.

Last month, the countries agreed to conduct joint naval drills in the South China Sea-where China has overlapping claims with the Philippines, Vietnam, Malaysia, Taiwan and Brunei-resulting in objections from Beijing.

On Nov. 6, Japanese and Vietnamese defense ministers also agreed that a base roughly 460 kilometers (285 miles) from the Spratly Islands, claimed by China and Vietnam among others, would welcome Japan's boats.

Japan also sent two boats to Vietnam to be used as patrol vessels amid reported demonstrations of force by China in the sea.

China and Japan also have conflicting claims to the uninhabited Senkaku Islands, known as the Diaoyu islands in China, in the East China Sea that controlled by Tokyo despite China and Taiwan each claiming the territory as its own.
Last Update: Dec 24, 2015 11:39 am
RELATED TOPICS