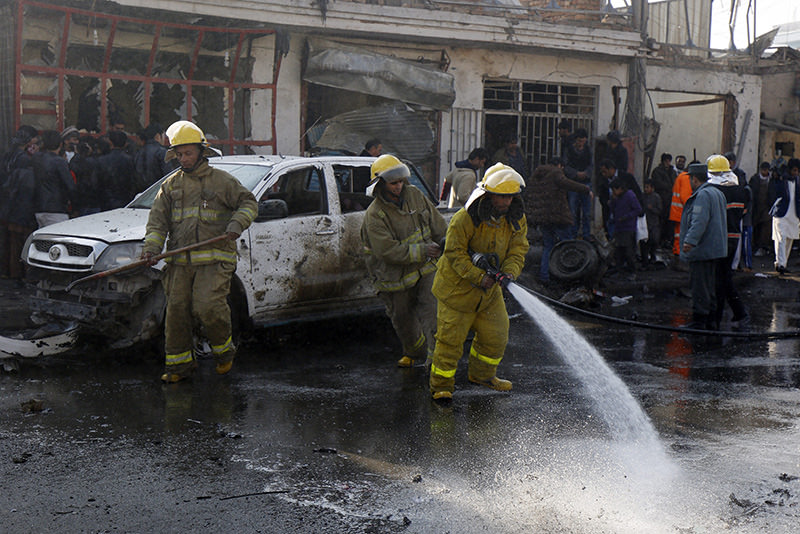 irefighters clean the scene of a suicide bomb attack near Kabul International Airport in Kabul, Afghanistan, 28 December 2015. (EPA Photo)
by French Press Agency - AFP Jan 01, 2016 12:00 am
A piercingly loud explosion rocked central Kabul Friday evening, with an official saying the target was apparently a restaurant popular with foreigners in the Afghan capital.

The explosion left a building in the area engulfed in flames, with firefighters rushing to the scene of the apparent militant attack. Gul Agha Rohani, Kabul deputy police chief, told AFP: "It was a suicide car bomb."

There was no further immediate information on the target or on any casualties from the blast, the latest in a series of attacks around Afghanistan in recent weeks.

Both sides agreed to hold a first round of dialogue between Afghanistan, Pakistan, US and China on January 11 to lay out a comprehensive roadmap for peace, officials in Kabul said.

Pakistan -- the Taliban's historic backers -- hosted a milestone first round of talks in July but the negotiations stalled when the insurgents belatedly confirmed the death of longtime leader Mullah Omar.

Afghanistan sees the support of Pakistan as vital to bring the Taliban to the negotiating table. But despite the growing bonhomie with Islamabad, analysts caution that any substantive talks are still a long way off. Afghan forces are currently battling to push out Taliban insurgents who seized large swathes of the key opium-rich district of Sangin in the southern province of Helmand.