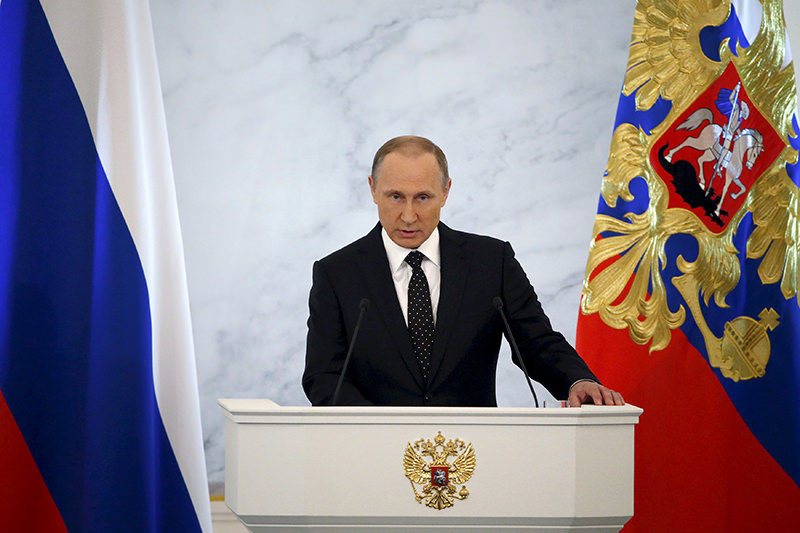 Russian President Vladimir Putin addresses the Federal Assembly and civil society representatives, at the Kremlin in Moscow, Russia, in this December 3, 2015 file photo. (REUTERS Photo)
by daily sabah Jan 01, 2016 12:00 am
Russian President Vladimir Putin signed and approved an updated National Security Strategy on Thursday, marking NATO as a 'security threat' for the country.

The security document argues that due to NATO's eastward expansion by "boosting military activities" in the bloc's countries and its "strive to dominate global affairs" has 'necessitated' Moscow to rethink strategies and strengthen its military.

The document says that NATO's "military build-up" violates international law, while adding that the U.S. and its allies have pursued a 'confrontational' policy against Russia's "independent domestic and foreign policy".

However, this is not the first time the Kremlin has designated NATO as 'a problem'.

Also at the time when the Ukraine crisis broke out, senior government adviser Mikhail Popov had said that the growth of NATO was an 'external threat'.

Previously, Turkey who is also a NATO member had downed a Russian warplane after the jet had ignored repeated warnings that it had violated Turkish airspace. Although Russia has insisted that it did not violate regulations and has condemned Turkey for the move, NATO has openly supported Turkey's move.

The first signs of NATO-Russia disagreements arose in 2014 when the Ukrainian crisis broke out. When former President Viktor Yanukovych was ousted the same year, the relations reached a new low. The reunification of the Crimea region with Russia also angered NATO.

NATO, the 28-member international alliance was founded in 1949. In 2009 it welcomed two new members, Albania and Croatia