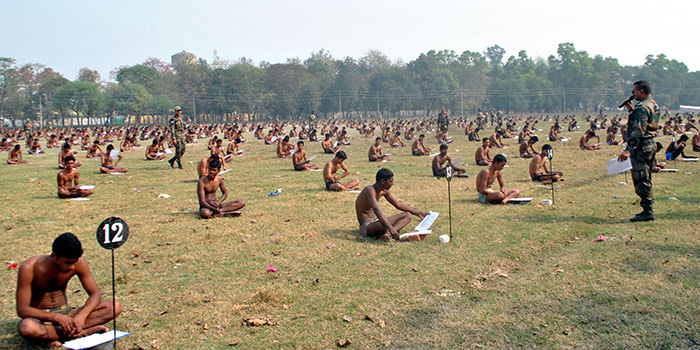 Candidates sit in their underwear in a field as they take a written exam in Muzaffarpur on February 28, 2016 (AFP Photo)
by Mar 02, 2016 12:00 am
More than 1,000 would-be army recruits were stripped to their underwear to prevent cheating in a written admissions test in India, news reports said Tuesday.

Photographs on NDTV network showed the men sitting in a field in the eastern state of Bihar, writing the test in their underwear.

Army officials explained it was to prevent them hiding pages torn from textbooks or mobile phones.

Some 1,100 candidates turned up to apply for military, clerical and technical positions with the army in Muzaffarpur town on Sunday.

Some of the job-seekers said the request to strip was not dignified. "I felt awkward but the army people told us it was to check cheating, so I got used to it," candidate Harishambhu Kumar told NDTV.

The Defence Ministry demanded an explanation from the army. Officers defended the move saying previously candidates were caught with cheating slips and mobile phones in their vests and undergarments.

Bihar has made headlines for mass cheating before. Last year, family members and friends of students taking the grade 10 exam were photographed climing the walls of an exam centre to pass notes to the candidates inside.
Last Update: Mar 02, 2016 10:31 am
RELATED TOPICS