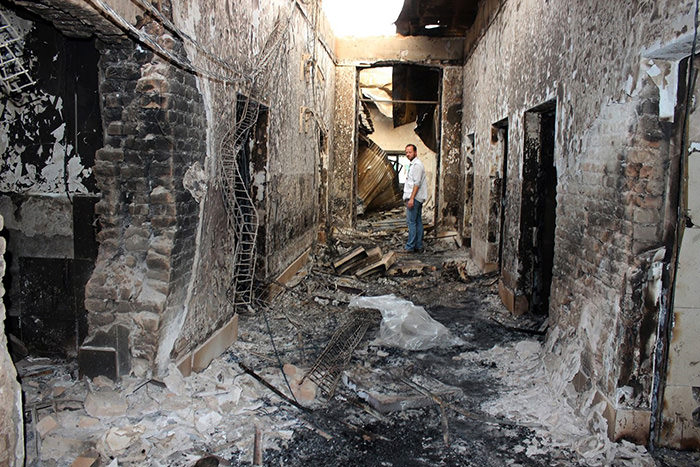 In this Oct. 16, 2015, file photo, an employee of Doctors Without Borders stands inside the charred remains of their hospital after it was hit by a U.S. airstrike in Kunduz, Afghanistan (AP Photo)
by Mar 18, 2016 12:00 am

Rights campaigners Friday lambasted United States "punishments" handed to officers involved in a catastrophic bombing raid on an Afghan hospital, saying the failure to criminally investigate them is an "injustice and insult" to the victims.

The bombing last October of the Medecins Sans Frontieres (MSF) hospital in Kunduz -- which came as NATO-backed Afghan forces clashed with the Taliban for control of the northern city -- left 42 people dead, triggering a storm of global criticism.

U.S. officials Thursday said those involved in the strike have been disciplined, with some suspended from duty and others facing "administrative" action such as "negative counselling" or being told not to do something again.

"For good reason the victims' family members will see this as both an injustice and an insult: the U.S. military investigated itself and decided no crimes had been committed," Human Rights Watch said in a statement.

"The failure to criminally investigate senior officials liable for the attack is not only an affront to the lives lost at the MSF hospital, but a blow against the rule of law in Afghanistan and elsewhere."

MSF, which has called repeatedly for an independent international inquiry, said it would seek more details from the U.S. government on the "punishments" before commenting.

The medical charity has previously branded the strike as a "war crime", saying the raid by a AC-130 gunship left patients burning in their beds with some victims decapitated and suffering traumatic amputations.

"The (U.S.) punishment is a joke," said Saeed Haqyar, a Kunduz resident who lost his uncle in the bombing.

"This barbaric, inhuman crime has pushed bereaved family members to the point of insanity. The perpetrators deserve to be hanged."

General John Campbell, the U.S. commander in Afghanistan at the time, admitted the strike was "caused primarily by human error", prompting a strong rebuke from the charity who slammed American forces for "gross negligence".

President Barack Obama has apologised for the Kunduz attack and the Pentagon has said it will pay compensation to the families of those killed.

The Pentagon is next week due to publish a version of its report on the attack. It will be redacted to remove classified material.

The strike came after a resurgent Taliban briefly captured the northern provincial capital in their biggest military victory since they were toppled in 2001.

Observers have said the bombing raid, which lasted nearly an hour, had left open the unsettling question of whether those involved had ripped up their own rulebook in a chaotic effort to take out the Taliban.

MSF has called for the International Humanitarian Fact-Finding Commission (IHFFC) -- an independent body created under international law but which has never been used -- to investigate the attack.

However, it would need permission from the U.S. and Afghanistan to proceed, and neither country has so far agreed.