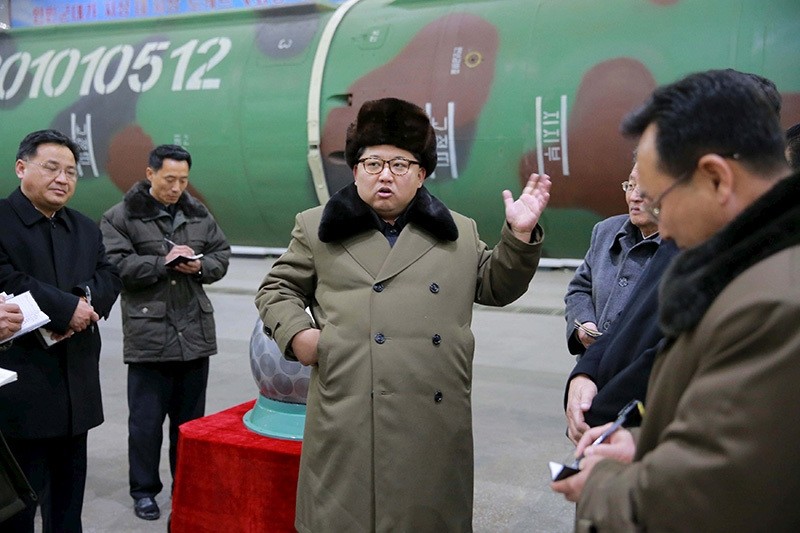 The sanctions, the first to target any North Koreans for rights abuses, affect property and other assets within the U.S. jurisdiction. They include 10 other individuals besides Kim and five government ministries and departments, the U.S. Treasury Department said in a statement.

"Under Kim Jong Un, North Korea continues to inflict intolerable cruelty and hardship on millions of its own people, including extrajudicial killings, forced labor, and torture," Acting Undersecretary for Terrorism and Financial Intelligence Adam J. Szubin said in the statement.

But inside North Korea, adulation for Kim, 32, is mandatory and he is considered infallible. A 2014 report by the United Nations, which referred to Kim by name in connection to human rights, triggered a strong reaction from Pyongyang, including a string of military provocations.

Earlier this year, Congress passed a new law requiring U.S. President Barack Obama to deliver a report within 120 days to Congress on human rights in North Korea. It had designate for sanctions anyone found responsible for human rights violations. Kim Jong Un, the third generation of his family to rule the Stalinist state, topped the list.

The U.S. Treasury Department identified Kim's date of birth as Jan. 8, 1984, a rare official confirmation of the young leader's birthday.

Many of the abuses are in North Korea's prison camps, which hold between 80,000 and 120,000 people including children, the report said.

The five agencies designated were two ministries that run North Korea's secret police and their correctional services, which operate the prison camps. Also named were the ruling Workers' Party's Organization and Guidance Department (OGD), a key bureau used by Kim to wield control of the party and the government.

The sanctions also named lower-level officials, such as Minister of People's Security Choe Pu Il, as directly responsible for abuses.

The report was "the most comprehensive" to date on individual North Korean officials' roles in forced labor and repression.

They said the sanctions would be partly "symbolic" but hoped that naming mid-level officials may make functionaries "think twice" before engaging in abuses. "It lifts the anonymity," a senior administration official told reporters.

The North Korea mission to the United Nations did not respond to a request for comment.

South Korea, which cut off all political and commercial ties with its own sanctions against the North in February, welcomed the move, saying it will encourage greater international pressure on the North to improve its human rights record.

U.N. Secretary General Ban Ki-moon, visiting Beijing on Thursday, said he is very concerned about rising tension on the Korean peninsula and called on North Korea to refrain from making any provocations.

Using sanctions against a head of state is not unprecedented. In 2011, the United States sanctioned Syrian President Bashar al-Assad and six other senior Syrian officials for their role in Syria's violence. Former Libyan leader Muammar Gaddafi was also sanctioned.

It is a sign "there probably isn't much of a hope for a diplomatic resolution," said Zachary Goldman, a former policy adviser in the U.S. Treasury's Office of Terrorism and Financial Intelligence.

The new sanctions follow a long list of measures that have had little effect in pressuring North Korean leaders to change, experts who study the North's political system said.

"The sanctions from today will do nothing whatsoever to alter North Korea's strategic calculus and only underscore their thinking that the U.S. has a 'hostile policy' against their country," said Michael Madden an expert on the North Korean leadership.

"Considering the sanctions name Kim Jong Un, the reaction from Pyongyang will be epic," he said. "There will be numerous official and state media denunciations, which will target the U.S. and Seoul, and the wording will be vituperative and blistering."

Peter Harrell, a former State Department sanctions official, said the measures would signal to companies in China, as well as others doing business with North Korea, the U.S. would continue escalating sanctions.

Harrell added it was unlikely any assets would be blocked, however "given the realities of where Kim Jong Un and his cronies likely hide their assets."

In March, the U.N. Security Council imposed harsh new sanctions on the country in response to its nuclear and missile tests.

That same month, Obama imposed new sanctions on North Korea after it conducted its fourth nuclear test and a rocket launch that Washington and its allies said employed banned ballistic missile technology.

Those steps froze any property of the North Korean government in the U.S. and essentially prohibited exports of goods from the U.S. to North Korea.

"The United States has maintained sanctions and pressure against the North for 65 years since the Korean War, but there's not been a single case where the intended result was accomplished," said Yang Moo-jin of the University of North Korean Studies in Seoul.

"How much time is left in the Obama administration? There may be the wish to prove the policy of 'strategic patience' against the North has not failed, but when it comes to practical results, there won't be much to show," Yang said.