Japan PM Abe changes half of the Cabinet in reshuffle, picks revisionist Inada as defense chief 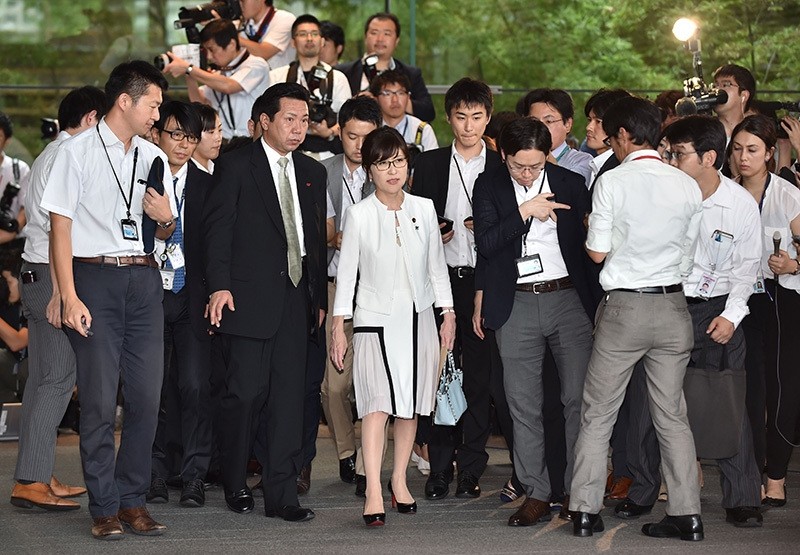 Newly appointed Japanese Defense Minister Tomomi Inada (C) is surrounded by the media during a visit to the prime minster's official residence in Tokyo on August 3, 2016. (AFP Photo)
by Compiled from Wire Services Aug 03, 2016 12:00 am

A woman with revisionist views of World War II history was named Japan's defense minister in a Cabinet reshuffle on Wednesday.

Prime Minister Shinzo Abe changed more than half of the 19-member Cabinet in a bid to support his economic, security and other policy goals.

Tomomi Inada, who had served as reform minister and most recently held one of the top posts in the ruling Liberal Democratic Party, will replace Gen Nakatani as defense minister. She will be the second female to fill the post.

Her appointment could unsettle relations with Asian neighbors with bitter memories of World War II atrocities.

Inada, a lawyer-turned-lawmaker, is a regular at Tokyo's Yasukuni Shrine, which honors war dead including convicted war criminals, a gesture seen by neighbors as an endorsement of Japan's militaristic past.

Inada has also made remarks defending Japan's wartime atrocities, including forcing many Asian women into sexual servitude in military-run brothels, and has led a party committee to re-evaluate the judgment of war tribunal by the Allies.

Finance Minister Taro Aso, Foreign Minister Fumio Kishida and Chief Cabinet Secretary Yoshihide Suga were among key Cabinet members who retained their portfolios, while 10 ministers were replaced in the reshuffle.

Abe promised while campaigning for last month's upper house elections to focus on economic revitalization in the short term, and to later seek to revise Japan's war-renouncing postwar constitution.

Since he took office in late 2012, Abe has sought to boost growth by pumping massive amounts of money into the world's third-biggest economy. But lavish monetary easing and public works spending so far have failed to reignite growth as much as hoped.

In the July 10 House of Councillors election, Abe acquired the two-thirds majority necessary to propose amendments to the constitution, as members of the LDP, coalition partner Komeito and other lawmakers open to constitutional reform gained 77 of the 121 contested seats.

Amending the country's pacifistic constitution, promulgated by the American Occupation in 1947, has been a stated goal of the LDP since it was formed in 1955.