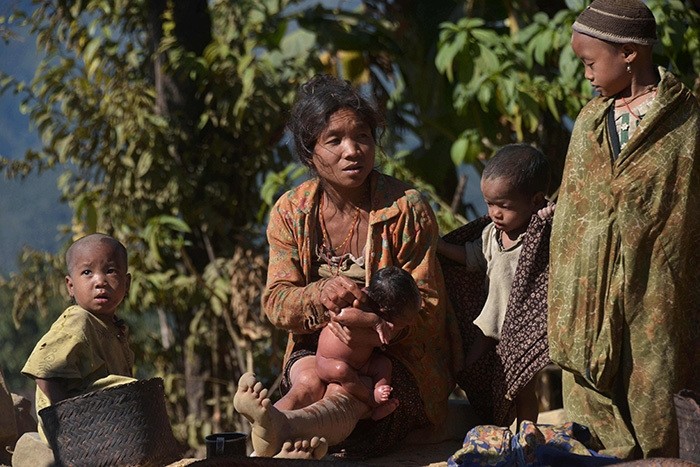 This photograph taken on December 24, 2014 shows a Naga ethnic woman bathing her child in Lahal township in the remote Sagaing region located in northern Myanmar. (AFP Photo)
by Anadolu Agency
Aug 05, 2016 12:00 am

At least 38 people, mostly children, have been killed by an undiagnosed disease in a remote area of Myanmar's north, officials and residents said Friday.

The illness, with measles-like symptoms, has hit eight villages in the far corner of Naga Self-Administered Zone in Sagaing region, a mountainous area populated by people from the Naga tribes on the border with India.

Kay Sai, the zone's chairman told Anadolu Agency by phone Friday that so far 38 people had been killed by the disease in Nanyon and Lahe Townships.

"We are not able to control the situation here," he added, saying that there was only one doctor in Lahe, and central and regional governments had yet to send a medical team to the area.

"A team of doctors from Nagaland in India is ready to cross the border as soon as they get permission from authorities in Myanmar," he said.

State-media said healthcare providers from the township health department and rural health center have been providing medical treatment to all villagers diagnosed with infectious diseases since the third week of July.

Reports have suggested that the illness that has caused the deaths leads to rashes, a difficulty breathing, and the patient emitting coughing up specks of blood.

Anadolu Agency was unavailable to contact the government's health ministry for further comments.

Athong Makury, head of the Council of Naga Affairs, said the government should declare a state of emergency in the region, and provide emergency assistance in order to control the situation.

"The government is not doing enough to help our people," he said on his Facebook page.

About 120,000 people live in Sagaing Division, where many Naga communities -- a conglomeration of several tribes inhabiting the North Eastern part of India and northwestern Burma -- are impoverished and inaccessible by road.