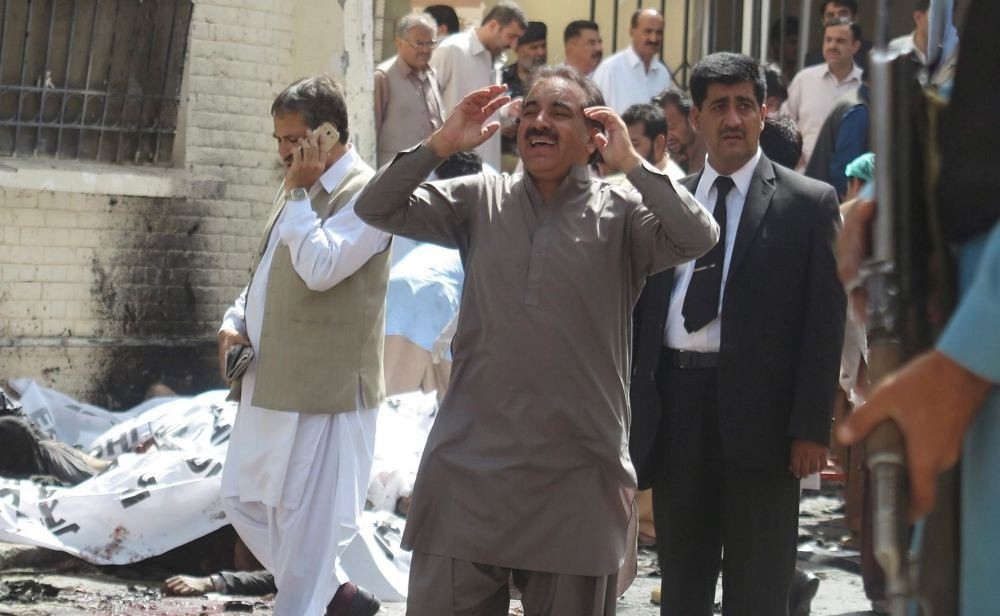 A man reacts after a bomb blast in restive Quetta, Pakistan.
by Compiled from Wire Services Aug 09, 2016 12:00 am
A suicide bomber killed at least 63 people and wounded dozens in an attack that struck a gathering of Pakistani lawyers on the grounds of a government-run hospital in the southwestern city of Quetta on Monday, police and doctors said. Witnesses described horrifying scenes of bodies being scattered about and the wounded screaming out and crying for help. No group immediately claimed responsibility for the blast. Nearly 100 lawyers had come to the hospital in the heart of Quetta, the capital of Baluchistan province, after the body of their colleague, prominent attorney Bilal Kasi was brought there. Kasi, the chief of the province's bar association, was shot and killed by gunmen earlier on Monday as he was on his way to his office. The lawyers gathered at the Quetta Civil Hospital to express their grief as is common with public figures. Kasi was among the most outspoken lawyers in the province and was popular for campaigning for improvements in the lawyers' community. "It was a suicide attack," said Zahoor Ahmed Afridi, a senior police officer.

Afridi said the attacker hit shortly after Kasi's body was brought in and that it seemed the two events were connected.Abdul Rehman, the director at the Civil Hospital, said the bombing killed 63 people, mostly lawyers. He said they were also treating 92 wounded in the explosion. One of the survivors described a horrifying scene, saying there were "bodies everywhere." Waliur Rehman said he was taking his ailing father to the emergency ward when the explosion shook the building. The blast was so powerful that they both fell down, he said. When he looked up, Rehman said he saw bodies of the dead and the wounding crying out for help. He was about 200 meters (yards) away from where the bombing struck, he added. Another witness, lawyer Abdul Latif, said he arrived at the hospital to express his grief over Kasi's killing. But he said he didn't know he would "see the bodies of dozens of other lawyers" killed and wounded shortly after arriving.

Sanaullah Zehri, chief minister in Baluchistan province, said both the bombing and Kasi's slaying seemed to be part of a plot to disrupt peace in the provincial capital. Sarfraz Bugti, the provincial interior minister, denounced the attack as an "act of terrorism." A Pakistani news channel reported that one of its cameramen was also killed in the blast. Local TV stations broadcast footage showing people running in panic around the hospital grounds. Afridi said most of the dead were lawyers who had gathered after Kasi's body was brought to the hospital.

Prime Minister Nawaz Sharif strongly condemned the blast and expressed his "deep grief and anguish over the loss of precious human lives" in the attack, in which several senior lawyers were also killed. "No one will be allowed to disturb the peace in the province that has been restored thanks to the countless sacrifices by the security forces, police and the people of Baluchistan," he said in a statement. Sharif asked the local authorities to maintain utmost vigilance and beef up security in Quetta. He also instructed health officials to provide the best treatment possible to those wounded in the attack. Gen. Raheel Sharif, the powerful army chief of Pakistan, visited the Quetta Civil Hospital, and met with the wounded. Ali Zafar, the head of the country's main lawyers' association, condemned the blast as "an attack on justice."

He said lawyers will observe three days of mourning and will not appear in court in solidarity with their colleagues and others killed in the attack. Quetta and the rest of Baluchistan province have long been hit by insurgency. There are several ethnic Baluch separatist groups operating in the resource-rich province, but al-Qaida and other militant groups also have a presence here. Aside from a long-running separatist insurgency, and sectarian tensions, Baluchistan also suffers from rising crime. Quetta has also long been regarded as a base for the Afghan Taliban, whose leadership has regularly held meetings there in the past. In May, Afghan Taliban leader Mullah Akhtar Mansour was killed by a U.S. drone strike while travelling to Quetta from the Pakistan-Iran border.
RELATED TOPICS