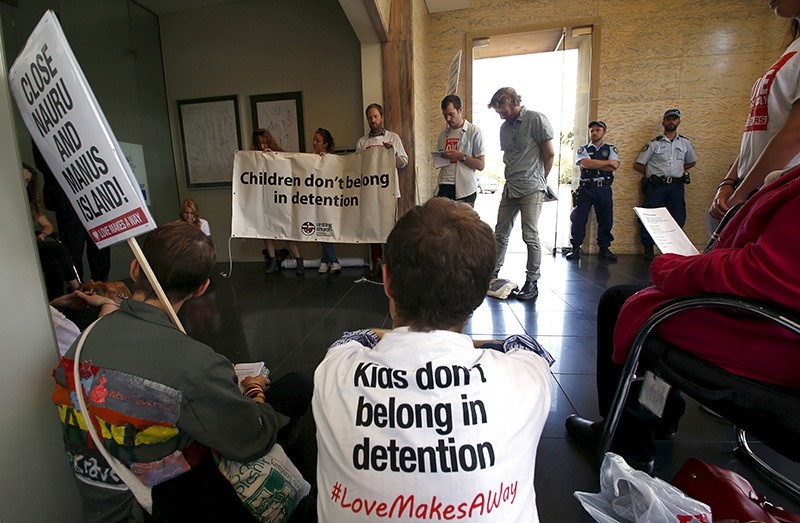 More than 2,000 leaked reports detailing allegations of sexual assault, child abuse and self-harm in Australian immigration centers on the island of Nauru were published on Wednesday, prompting rights groups to renew calls for refugees to be resettled elsewhere.

Under Canberra's current policy, asylum seekers arriving by boat are sent to the remote Pacific island nation of Nauru or to Papua New Guinea's Manus Island. They will not be allowed to resettle in Australia even if they eventually win refugee status.

While the flow of asylum boats to Australia has dried up, some 442 people remain on tiny Nauru and almost double that number on Manus. The incident reports leaked to The Guardian Australia include allegations that asylum seekers on Nauru, including children, face assaults, sexual abuse and mental distress.

The reports allege incidents such as guards threatening a boy with death and only allowing a young woman a longer shower in return for sexual favors.

Mental stress caused by prolonged detention was deemed to be the cause of alleged cases of self-harm, including a woman trying to hang herself and a girl sewing her lips together.

One girl wrote in her school book in 2014 that "she was tired, doesn't like camp and wants to die." The report said she wrote: "I want DEATH" and "I need death."

The Guardian said the reports, published in redacted form to remove identifiers, were written by staff in the detention center and were the largest cache of leaked documents released from inside Australia's immigration regime.

While some of the incidents had been reported by the media before or detailed in inquiries, The Guardian said its analysis of the 2,116 reports showed that children were the subject of more than half of them.

Australian Prime Minister Malcolm Turnbull said the material would be examined "to see if there are any complaints there or issues there that were not properly addressed." However, the government stressed the reports were allegations, not findings of fact, adding Canberra would continue to support Nauru to provide for the welfare of those on the island.

"Australia's offshore processing of refugees must end, and all of the refugees and asylum seekers on Nauru and Manus Island must be resettled immediately," Amnesty International's Anna Neistat said Wednesday.

The leak prompted former workers from Nauru including social workers, teachers and child protection specialists from Save the Children to come forward to corroborate the reports.

"These incident reports were not leaked by us, or by any person known to us," former caseworker Natasha Blucher said. "However, now that this information is on the public record, it enables us to speak out in an unprecedented way."

The Australian government said the documents were evidence of the "rigorous reporting procedures that are in place in the regional processing center."

But Former Save the Children teacher Jane Willey, who recognized her own handwriting in some of the reports, said the published data was nowhere near the full extent of those written. "What you are seeing here is just the tip of the iceberg," said Willey, who worked on Nauru between July 2014 and March 2015.

Willey said seeing children deteriorate over time was one of the worst aspects of her work. "Seeing children refer to themselves as a boat number, seeing evidence of self-harm... I dread to think of how those kids are doing," she told AFP.

The U.N.'s refugee agency said it was "gravely concerned" by the allegations raised in The Guardian's report, adding it had observed and reported a "progressive deterioration" of the situation of refugees and asylum seekers on Nauru on its regular visits since 2012.

Under its tough immigration policy, Australia detains asylum seekers who arrive by boat at offshore detention centers, where they are subject to conditions that have been described as appalling by rights advocates. Australia's government has strongly defended its immigration policy despite criticism, saying it has halted the spate of boat arrivals -- and drownings -- of earlier years.