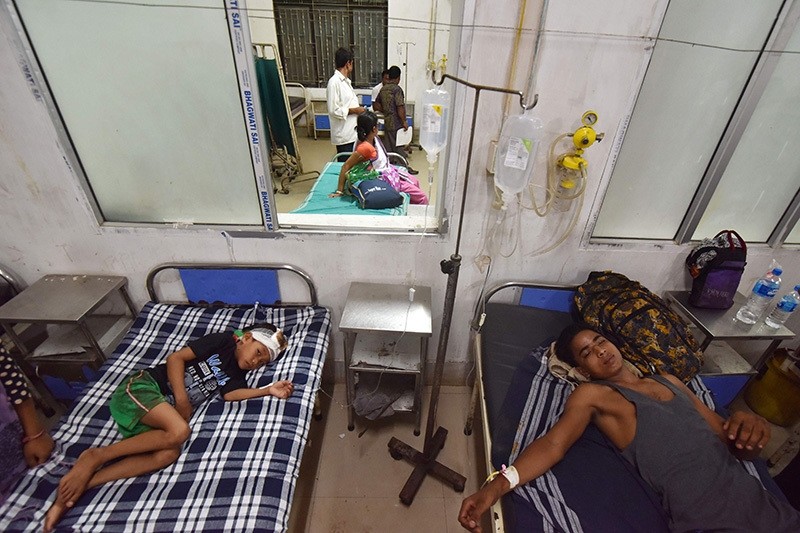 Indian villagers who were injured in a militant attack at Balajan Tinali, receive medical attention at Barpeta Medical College Hospital in Barpeta on August 5, 2016 (AFP Photo)
by Aug 11, 2016 12:00 am

An Indian family alleged Thursday that their 10-month-old baby died after treatment was delayed by staff at a large, government-run hospital demanding bribes.

Sumita and Shiv Dutt said they rushed their ill son to the hospital on Sunday night in Uttar Pradesh state, where a nurse demanded payment in return for getting their paperwork submitted.

A cleaner then reportedly demanded another bribe to arrange a bed for the child in Bahraich hospital, which the family said on Indian television they had no choice but to pay.

Sumita Dutt alleged a medic asked for money two days later to administer an injection, but she had run out of funds, leading to an argument and a delay in the child receiving the treatment.

"I asked him to give me some time, promising to give him whatever amount he asked for," the sobbing mother told NDTV news network, cradling her dead child in Bahraich town.

The child's angry father accused staff of demanding bribes at almost every step of the way. "There is no shortage of bribe takers here. We are very distraught," he said, without specifying how much he paid in bribes.

Bahraich hospital said it was launching a probe into the allegations, but denied any delay in treating the baby. It was not known what the baby died of.

"There was no delay in administering antibiotics to the child. We gave the doses morning and evening, every day," said OP Pandey, a senior doctor, adding the cleaner had been sacked and the nurse moved to another department.

Demands for bribes and undue payments for treatment are rife in India's healthcare system where overcrowded state-run hospitals lack resources, forcing many Indians, even the poor, to seek expensive private care.

In June, a 75-year-old man died after he was allegedly refused admission to a hospital in the eastern city of Kolkata for not paying a 200-rupee ($3) bribe.

A month earlier, a teenager reportedly died after his father refused to pay a 300-rupee bribe to a government hospital worker in southern Tamil Nadu state.