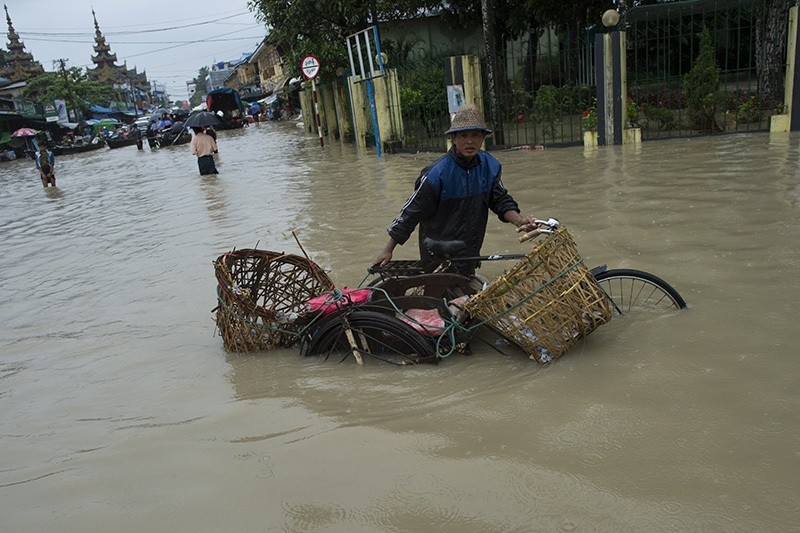 A man pushes his trishaw through the water after seasonal flooding hit the city of Pathein in the Irrawaddy region on August 13, 2016. (AFP Photo)
by Anadolu Agency Aug 13, 2016 12:00 am

At least eight people have died in Myanmar as widespread flooding forces almost half a million people to be moved from their homes.

Incessant downpours since July 30 have brought floods to nine regions along the three main rivers of the country, including the Ayeyawady, the country's main inland waterway that flows from north to south.

The Ministry of Social Welfare, Relief and Resettlement said Saturday that eight people have now been killed and more than 430,000 displaced.

"Magway and Ayeyawady regions are the worst-hit areas this year," the ministry's permanent secretary Soe Aung said, adding that more than half of those displaced are from the two regions.

Although the water level in some regions has gradually dipped, the numbers of flood victims is on the rise with floods shifting to southern parts of the country.

Geographically, Myanmar sees itself in two sections -- upper Myanmar (the north and central parts, and mostly higher regions) and lower Myanmar (the south and southeast, which are mostly low-lying areas).

Authorities in Western Rakhine State -- the home of the country's Rohingya Muslim population -- and Chin State have remain on alert as the Department of Meteorology and Hydrology has warned of possible floods and landslides as heavy rain from another storm is expected to hit in the Bay of Bengal in days.

Floods are common in Myanmar during the monsoon period.

Last year, almost 100 people died and around one million were affected by flooding across the country, according to the government.