Five civilians killed, many others injured in Kashmir’s anti-India protests 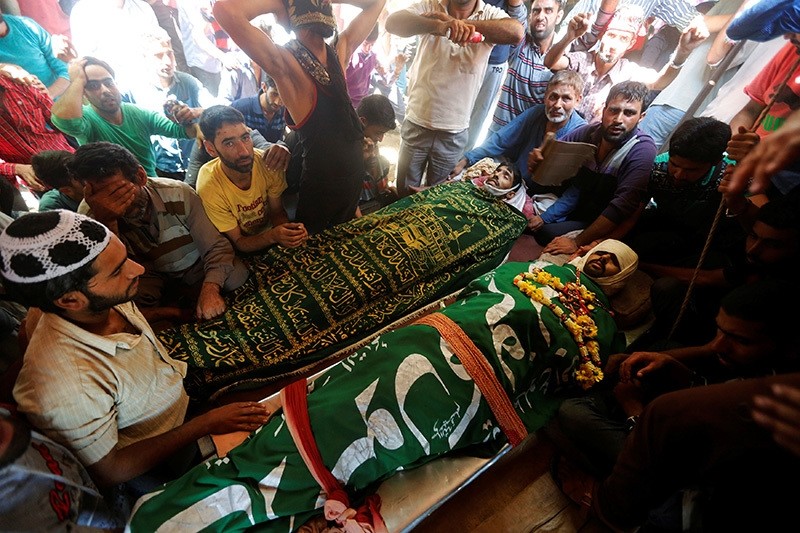 Kashmiri villagers sit next to the bodies of civilians, who according to local media were killed during clashes between police and protesters, during their funerals in Beerwah, north of Srinagar, August 16, 2016. (Reuters Photo)
by Associated Press Aug 16, 2016 12:00 am

Four people were killed when troops fired live ammunition, shotgun pellets and tear gas to control hundreds of people throwing stones and chanting slogans in Aripanthan village, west of the main city of Srinagar, a police official said on condition of anonymity because of department policy. Three of the injured were in critical condition, police said.

News of the killings brought thousands of other Kashmiris from neighboring villages into the streets chanting "Go India, go back" and "We want freedom." Large crowds continued anti-India chants at a funeral for the four dead civilians Tuesday afternoon.

More protests erupted across the region as thousands of people took to the streets in defiance of curfew orders.

A fifth civilian was killed as government forces fired on stone-throwing protesters in the southern Anantnag area.

Residents of Kurhama village in eastern Kashmir said soldiers in trucks came into the village and entered dozens of homes, beating men and women. They said the soldiers also ransacked houses and broke into shuttered shops.

A local police officer said the action occurred after a group of youths pelted an army convoy with stones. Speaking on condition of anonymity, he said at least 15 villagers were hospitalized with various injuries.

The disputed Himalayan region has been extremely tense since government troops killed a popular rebel leader nearly six weeks ago.

Tuesday's deaths raised the death toll from the largest protests in years to 64, including two policemen. Thousands more have been injured.

Shops, businesses and schools have remained closed because of the security lockdown and protest strikes called by separatists, who challenge India's sovereignty over Kashmir. Residents have struggled to cope with shortages of food, medicine and other necessities. Hospitals have been overwhelmed by the many injured.

Kashmir is divided between India and Pakistan and claimed in entirety by both. Anti-India feelings run strong in the Muslim-majority region, where most people favor independence or merger with Pakistan.

More than 68,000 people have been killed since rebel groups began fighting Indian forces in 1989 and in the subsequent Indian military crackdown.