Flood-hit elephant that travelled 1,700 km from India to Bangladesh dies 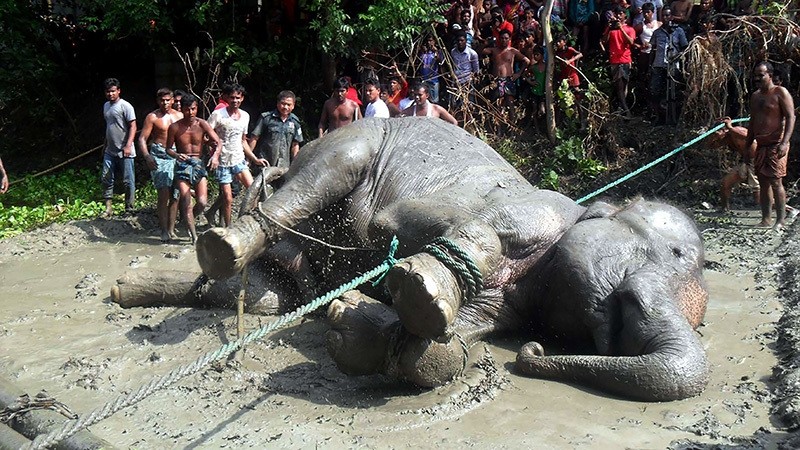 A tranquillised wild elephant lying on the ground after being pulled from a pond by Bangladesh forest officials and villagers in the Jamalpur district, some 150 kms north of capital Dhaka. (AFP Photo)
by Aug 16, 2016 12:00 am

An elephant thought to have travelled at least 1,700 kilometres from India into Bangladesh after becoming separated from its herd by floods died on Tuesday despite last-ditch efforts to save him.

The distressed animal was tranquillised three times in sometimes dramatic bids to try to transport him to a safari park in Bangladesh, after he washed across the border in late June.

He was eventually given huge amounts of saline and chained in a paddy field in a northern village to help him recover, but he was "too weak and tired" from his ordeal, officials said.

"It breathed its last at around 7am (0100 GMT)," the government's chief wildlife conservator Ashit Ranjan Paul told AFP.

"We have given our highest effort to save the animal. At least 10 forest rangers, vets and policemen have constantly followed it for the last 48 days. But our luck is bad," he said.

Paul said the animal likely travelled more than 1,700 kilometres (1,060 miles) from the northeastern Indian state of Assam after being separated from his herd in severe flooding.

The animal ran amok and charged into a pond after Bangladesh forest officials hit him with a tranquilliser dart last Thursday.

Local villagers jumped into the pond to save the four-tonne animal from drowning by stopping it from toppling into the water.

A mahout was also critically injured during another rescue effort on Monday after being kicked by the again tranquillised elephant.

Local media blamed excessive tranquillising for the animal's death, saying he became too weak to stand.

But Paul said the long journey was responsible, adding that rescue efforts had been hampered by the thousands of curious villagers following him.

"In the end it became too tired by travelling such a great length. It had been separated from its herd for some two months and did not get the nutrients that it needed," he said.

"Thousands of villagers followed it everyday as it entered into Bangladesh and then travelled to villages and river islands across the Brahmaputra river."