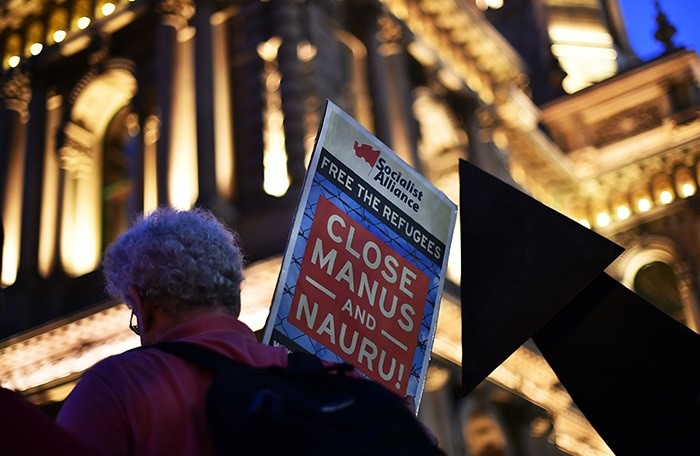 Australia and Papua New Guinea on Wednesday said they had agreed to close a controversial Australian-funded asylum seeker detention center on Manus Island, although the ultimate fate of 800 refugees held in the camp remained unclear

Papua New Guinea and Australia said yesterday they have agreed to close a detention center on Manus Island for asylum seekers but they offered no details on when it will happen or on the fate of the 850 men being held there.

Australia's tough stance on migrants and refugees has long drawn condemnation from human rights groups. The country has a policy of sending people who try to reach its shores by boat to island detention centers, including Manus Island in Papua New Guinea.

Leaked documents and eyewitness reports have detailed grim living conditions in many of Australia's detention centers. In April, Papua New Guinea's Supreme Court ruled that the Australian-run detention center there was unconstitutional.

Papua New Guinean Prime Minister Peter O'Neill issued a statement Wednesday saying he met with Australian Immigration Minister Peter Dutton in the capital, Port Moresby, and that the two countries agreed the center will be closed.

O'Neill said he was satisfied that officials from both countries were making progress toward that end. "It is important that this process is not rushed but carried out in a careful manner," O'Neill said in his statement. "This must take into account the interests of the people of Papua New Guinea and the well-being of asylum seekers and refugees."

Dutton said it had been the longstanding position of his government to work with Papua New Guinea to close the Manus center and to move the migrants elsewhere in Papua New Guinea or back to their country of origin. "Our position, confirmed again today with PNG, is that no one from Manus Island Regional Processing Centre will ever be settled in Australia," Dutton said in a statement. He said that "people smugglers" continue to target Australia but that the government has ensured that no boats have made it to the nation's shores in more than two years. He said the government plans to close a total of 17 detention centers and remove all children from detention.

Last month, Australian Prime Minister Malcolm Turnbull ordered a sweeping investigation into alleged abuses at a juvenile detention center in the city of Darwin after a video emerged of Aboriginal teens being tear-gassed, stripped naked and shackled to a chair.

And earlier this month, the Guardian newspaper published leaked reports detailing the abuse of children at another offshore Australian detention center, on the remote island nation of Nauru.

The reports allege incidents such as guards threatening a boy with death and only allowing a young woman a longer shower in return for sexual favors.

Mental stress caused by prolonged detention was deemed to be the cause of alleged cases of self-harm, including a woman trying to hang herself and a girl sewing her lips together. The Guardian said the reports, published in redacted form to remove identifiers, were written by staff in the detention center and were the largest cache of leaked documents released from inside Australia's immigration regime.

While some of the incidents had been reported by the media before or detailed in inquiries, The Guardian said its analysis of the 2,116 reports showed that children were the subject of more than half of them. The UN's refugee agency said it was "gravely concerned" by the allegations raised in The Guardian's report, adding it had observed and reported a "progressive deterioration" of the situation of refugees and asylum-seekers on Nauru through its regular visits since 2012.

He accused Australia of losing its "moral compass" over offshore detention, suggesting New Zealand should step in to resettle asylum seekers and refugees and bring "to an end" the detaining of asylum seekers by Australia.

Under its tough immigration policy, Australia detains asylum seekers who arrive by boat at offshore detention centers, where they are subject to conditions that have been described as appalling by rights advocates. Australia's government has strongly defended its immigration policy despite criticism, saying it has halted the spate of boat arrivals - and drownings - of earlier years.