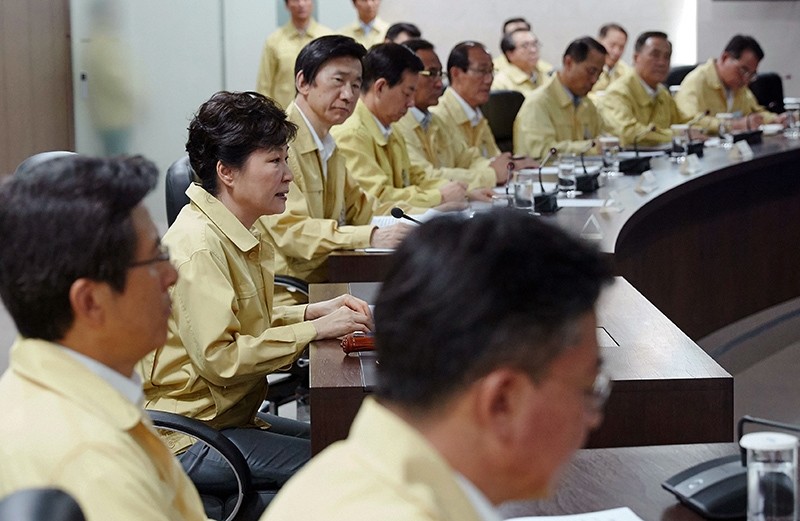 South Korean President Park Geun-hye. second from left, presides over a session of the National Security Council at the presidential house in Seoul, South Korea, Monday, Aug. 22, 2016 (AP Photo)
by German Press Agency - DPA Aug 22, 2016 12:00 am
North Korea threatened to launch a pre-emptive nuclear strike as annual US and South Korean military exercises began in the region on Monday.

The North Korean People's Army claimed that the US and its allies were preparing for nuclear war on the Korean peninsula.

"The nuclear warmongers should bear in mind that if they show the slightest sign of aggression ... it would turn the stronghold of provocation into a heap of ashes through (a) Korean-style preemptive nuclear strike," a People's Army spokesman was quoted as saying in state media.

The US and South Korea dispute the North Korean accusations that the exercises are a rehearsal for an invasion of the isolated nation.

"UFG is designed to enhance Alliance readiness, protect the region and maintain stability on the Korean peninsula," USFK said.

25,000 US soldiers are expected to take part in the exercises.

A core part of the 12-day-long manouevre is typically computer-generated simulations of a war on the peninsula.

Tension in the region has been heightened since North Korea conducted a nuclear test in January.
Last Update: Aug 22, 2016 1:41 pm
RELATED TOPICS