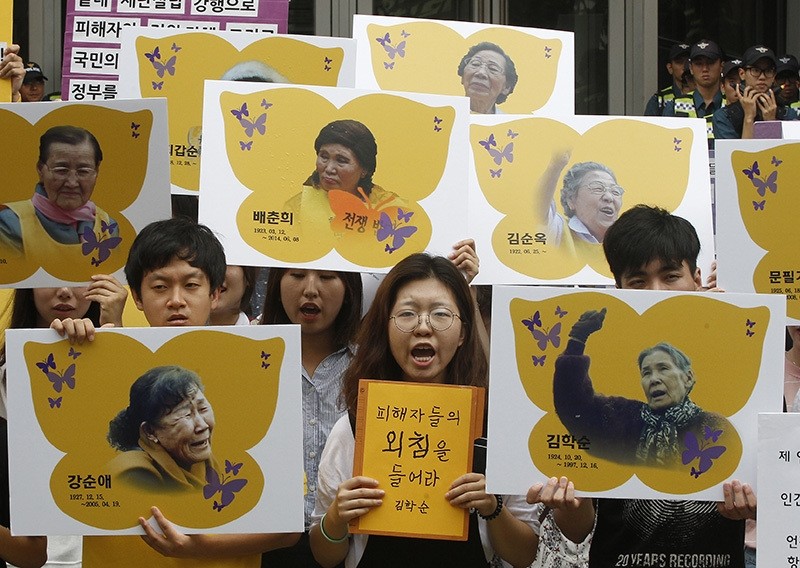 In this July 28, 2016 file photo, protesters hold the portraits of the former sex slaves who were forced to serve for the Japanese military in WWII, during a rally against the Reconciliation and Healing Foundation in Seoul, South Korea. (AP Photo)
by Compiled from Wire Services Aug 25, 2016 12:00 am

South Korea said Thursday that surviving South Korean women who were forced into sexual slavery by Japan's military in World War II will be eligible to receive around 100 million won (about $90,000) each from a foundation that will be funded by the Japanese government.

Seoul's Foreign Ministry said that the families of deceased victims will be able to receive about 20 million won ($18,000), and added it expects the Japanese government to soon transfer a promised 1 billion yen ($9.9 million) to the Reconciliation and Healing Foundation formally launched in Seoul last month.

A South Korean foreign ministry official said Thursday that besides the funds to be allocated to the around 40 survivors, the families of others who have already passed away would receive 20 million won ($18,000).

"The cash provision is intended to restore honor and dignity of the comfort women victims and to heal their wounds," the official was quoted as saying by local news agency Yonhap.

After a trilateral meeting between the foreign ministers of Japan, South Korea and China in Tokyo on Wednesday, Tokyo's Fumio Kishida told reporters that he and his Seoul counterpart Yun Byung Se "agreed to sincerely implement the [December] deal", according to Kyodo News.

South Korea and Japan agreed to set up the foundation in December as they settled a decades-long dispute over South Korean sex slave victims. Seoul says there are currently 46 surviving South Korean victims and 199 victims who had died.

The opening of the foundation's office in Seoul was met by protests from activists and students who criticized the December agreement, which remains controversial in South Korea where many believe the Seoul government settled for far too less.

Under the agreement, which was described by both governments as "irreversible," Japan pledged to fund the foundation to help support the victims.

South Korea, in exchange, vowed to refrain from criticizing Japan over the issue and will try to resolve a Japanese grievance over a statue of a girl representing victims of sexual slavery that sits in front of the Japanese Embassy in downtown Seoul.

Aside from the agreement's failure to account for victims from other former Japanese colonies, it has been criticized in South Korea for not being legally binding.

There has also been a sense in the South for some time that right-leaning Japanese politicians -- including Prime Minister Shinzo Abe -- are in denial about the brutal realities of Tokyo's imperialist past, which saw as many as 200,000 women and girls forced into service at military brothels during the last century.

Japan had maintained for years that colonial era issues related to South Korea were resolved under a 1965 bilateral treaty, and Abe's indirect apology delivered by his foreign minister in December did little to persuade critics that he had undergone a change of heart.