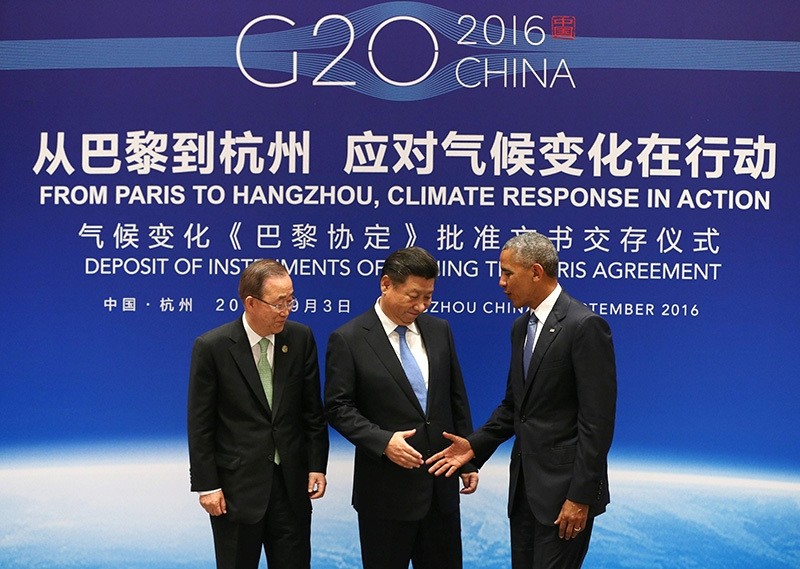 The United States and China on Saturday formally joined the Paris climate change agreement, with President Barack Obama hailing the accord as the "moment we finally decided to save our planet".

The move by the world's two biggest polluters is a major step forward for the 180-nation deal, which sets ambitious goals for capping global warming and funneling trillions of dollars to poor countries facing climate catastrophe.

Obama and his Chinese counterpart Xi Jinping handed ratification documents to UN chief Ban Ki-moon, who said he was now optimistic the agreement will be in force by the end of this year.

At a ceremony in the Chinese city of Hangzhou, Obama said climate change would "define the contours of this century more dramatically than any other challenge".

History would show that the Paris deal would "ultimately prove to be a turning point", he said, "the moment we finally decided to save our planet".

"There's an American saying, you need to put your money where your mouth is. That's what we're doing."

The Paris accord aims to limit global temperature increases to two degrees centigrade, and will be triggered after it is ratified by at least 55 countries, accounting for 55 percent of global greenhouse gas emissions.

The US and China are together responsible for some 40 percent of the world's emissions, so their participation is crucial.

"Hopefully this will encourage other countries to take similar efforts," he said in Hangzhou, where he is to host the G20 summit of the world's leading developed and emerging economies.

Until Saturday only 24 of the signatories had ratified the accord, including France and many island states threatened by rising sea levels but who only produce a tiny proportion of the world's emissions.

Ban said there would be high-level talks in New York later this month to push more countries to sign up, and told the two leaders they had "added powerful momentum" to efforts to bring the accord into force.

"I am optimistic we can do it before the end of this year."

Climate is one of the few areas where the world's two most powerful countries -- who are at loggerheads on issues ranging from trade disputes, cyberspying and the South China Sea -- are able to find common cause.

Campaigners welcomed the move, with WWF saying they had sent "a very powerful signal that there will be real global action on climate change."

But some environmental groups say that the Paris pledges by China, the US and others fall far short of what is needed to meet the goal of less than two degrees of warming.

"This moment should be seen as a starting point, not the finale, of global action on climate," said Greenpeace policy adviser Li Shuo.

For China, ratifying the agreement fits with Beijing's domestic political agenda of being seen to make efforts to clean up the environment, after years of breakneck industrial development led to soaring air, water and ground pollution.

The scourge is estimated to have caused hundreds of thousands of early deaths, and is the source of mounting public anger.

Under the Paris accord, China has pledged to cut its carbon emissions per unit of GDP by 60-65 percent from 2005 levels by 2030 and increase non-fossil fuel sources in primary energy consumption to about 20 percent.

Neither of those requirements implies a commitment to cut absolute levels of emissions, although China is also obliged to have them peak by "around 2030".

During the negotiations over the Paris deal Beijing stressed the concept of "differentiated responsibilities" -- the idea that developed countries should shoulder the lion's share of the burden as they have polluted most since the Industrial Revolution.

For its part the White House is looking for the Paris accord to come into force during Obama's tenure, in part to burnish his climate legacy, but also to ensure it is not derailed by the forthcoming US election.

The administration has been careful to structure the agreement so that it can be enacted by Obama under existing presidential authorities and without Congressional approval.

Policymakers from Tokyo to Stockholm have bitter memories of George W. Bush and his Republican Party refusing to ratify the Kyoto Protocol after it was agreed by Bill Clinton's administration.