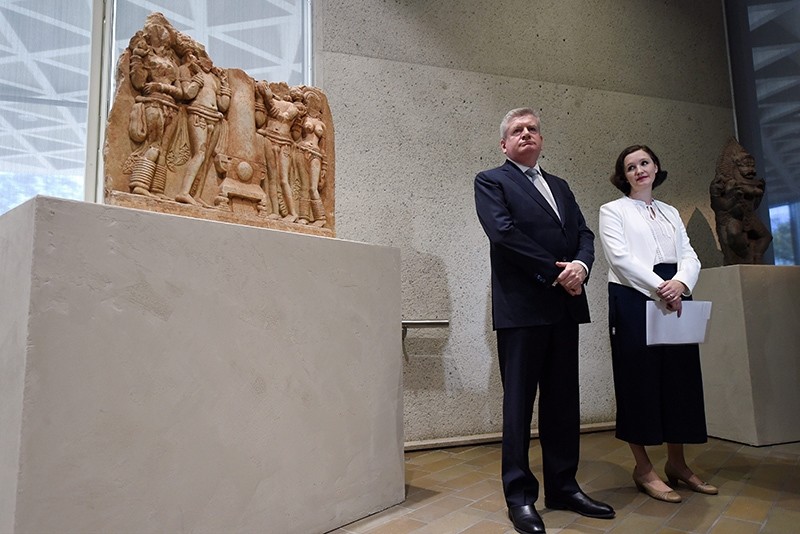 Australian Arts Minister Mitch Fifield (2-R) and Deputy Director of the National Gallery of Australia, Kirsten Pasley (R), attend a press conference at the National Gallery of Australia (NGA), in Canberra, September 19 2016 (EPA Photo)
by German Press Agency - DPA
Sep 19, 2016 12:00 am
Australia returned two ancient sculptures to India on Monday after suspicions that they had been stolen.

The 3rd century Worshippers of the Buddha from the southern Indian state of Andra Pradesh and the 12th century Goddess Pratyangira from Tamil Nadu state, also in the south, were purchased by the National Gallery of Australia in 2005 from a New York dealership.

Subhash Kapoor, the owner of the dealership, Art of the Past, was arrested in 2011 for his alleged involvement in the illicit art trade.

Australian Arts Minister Mitch Fifield handed the two sculptures to India's culture minister, Mahesh Sharma, at a ceremony held at the gallery in Canberra on Monday.

Sharma said their return would "add colour and beauty" to bilateral relations and the items will be displayed in India's National Museum.

"They have emotional value for us," he said.

The national gallery said that after an independent review this year, 11 works purchased from Kapoor were confirmed to have "highly problematic" provenance.

The Goddess Pratyangira sculpture, purchased for 247,500 US dollars (222,000 euros), was in India in 1974 according to photographic evidence, the gallery said. This contradicted the dealer-supplied provenance, making it "likely to have been illegally exported from India."

The Worshippers of Buddha sculpture, purchased for 595,000 US dollars, was in India as late as the 1990s, the gallery said, which also contradicted documents supplied by the dealership.

"This new evidence means the (national gallery) cannot legally or ethically retain these works, and returning them to India is unquestionably the right thing to do," gallery director Gerard Vaughan said.

Fifield said the items were a major public attraction. "This was a decision not taken lightly by the gallery," he added.

The two sculptures were removed from display in August 2015.

At least eight other objects bought from the same dealer are the focus of investigations, according to the gallery.