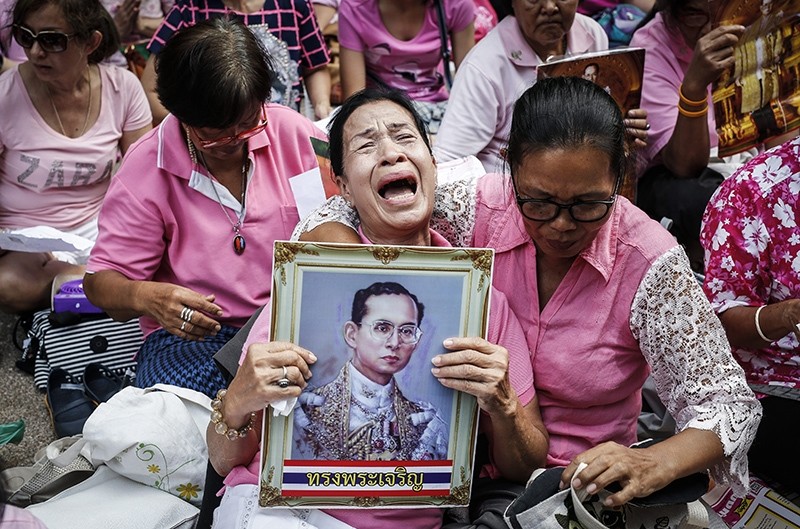 A Thai well-wisher weeps as she is comforted by others during a prayer for Thai King Bhumibol Adulyadej's recovery at the Siriraj Hospital in Bangkok, Thailand (EPA Photo)
by Compiled from Wire Services Oct 13, 2016 12:00 am

King Bhumibol Adulyadej, revered in Thailand as a demigod, a humble father figure and an anchor of stability through decades of upheaval at home and abroad, died Thursday. He was 88 and had been the world's longest reigning monarch.

The Royal Palace said Bhumibol died "in a peaceful state" at Siriraj Hospital, where he had been treated for various health problems for most of the past decade.

Hundreds of tearful Thais offered flowers and chanted prayers Thursday for King Bhumibol Adulyadej outside the Bangkok hospital where the world's longest-reigning monarch is being treated for multiple health problems.

Thais wearing pink and yellow shirts in the 88-year-old king's honor have been gathered outside Siriraj Hospital since Sunday, when the royal palace described his health as "unstable." The palace said in a statement late Wednesday that the king's blood pressure had dropped, his liver and kidneys were not working properly and he remained on a ventilator.

As the nation waited for news on the king's health, the National Legislative Assembly planned to hold a special session Thursday night, a parliamentary official said on condition of anonymity because of the sensitivity of the situation.

Saranya Chungsuvanich said she came to the hospital Thursday after hearing about the king's condition.

"I feel that our king is like my father," she said. "Every day, I will pray at home, but I feel that I should be here, very close to him. ... I hope that he will feel better, in no time."

"The news yesterday was not so great," said Sopavadee Sankosik, a music school owner from Bangkok. "So I think if we come here and we all pray, and give him well wishes, there will be a miracle."

Many in the crowd sat in the hospital courtyard, positioned to look up toward the building where the king is confined. Every now and they shouted "Long live the king," with some wiping away tears.

The highly revered Bhumibol has suffered from a variety of ailments related to old age, including kidney and lung problems.

Last week, doctors performed a hemodialysis to purify his blood. They also replaced a tube that drains excess cerebrospinal fluid.

Because Bhumibol has been king since 1946, there is great concern about the eventual succession. Crown Prince Vajiralongkorn, who returned home from Germany on Wednesday, has not earned the same respect as his father.

The Thai stock market is down significantly this week amid worries about the king's health, though it rose slightly Thursday.