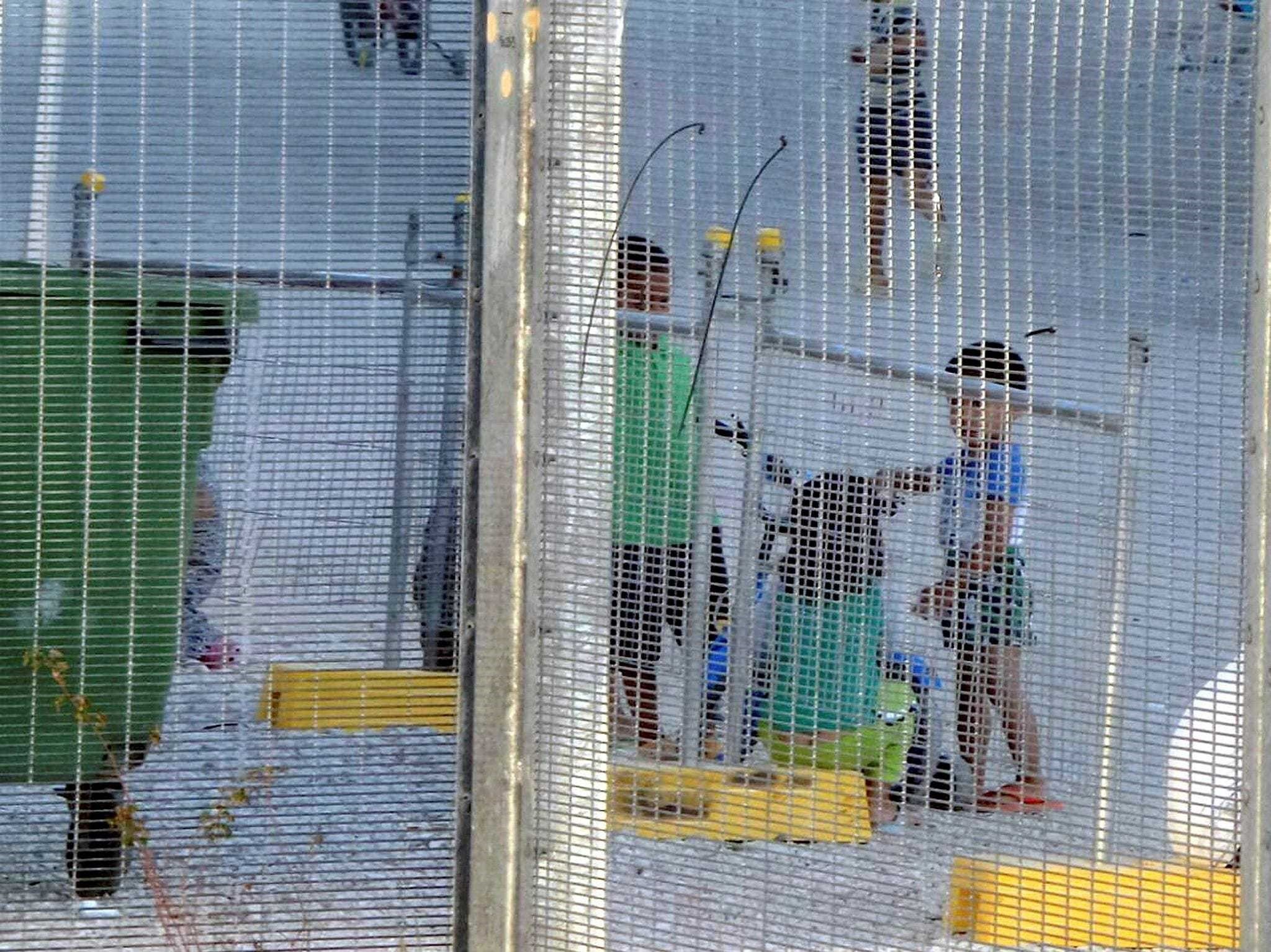 Children play near a fence at the country's Australian-run detention center on the Pacific island nation of Nauru.
by Compiled from Wire Services Oct 19, 2016 12:00 am

Asylum-seekers in Australia's refugee camps in the Pacific atoll nation of Nauru have been subjected to violent crimes, Amnesty International said. The Australian government rejects allegations of torture

Amnesty International said in a report Monday that asylum-seekers and refugees on Nauru were "driven to absolute despair" and were struggling with an "epidemic of self-harm," adding that their living conditions fit international law's definition of torture. The report titled "Island of Despair," alleged that asylum seekers on Nauru refugee camps attempted suicide as a result of worsening conditions in indefinite detention.

Australia's Department of Immigration and Border Protection said the report repeated claims that had already been refuted. It said Amnesty International had failed to approach the Australian government to verify its allegations.

The London-based human rights group found in an investigation that it appeared that no Nauruan had been held to account despite allegations of dozens of sexual assaults and physical attacks from 1,159 asylum seekers and refugees who live among 10,000 local residents on the tiny island. "According to confidential information provided to Amnesty International in September 2016, in the preceding two years there had not been a single prosecution involving refugees or asylum seekers as complainants in cases of assault, rape and theft," the report said.

Australia has been widely criticized for its overseas refugee prison camps in Nauru and Papua New Guinea islands. The attempts to deter asylum seekers from Africa, the Middle East and Asia from trying to reach Australian shores by boat from Indonesian ports by sending them to immigration camps at Nauru or Papua New Guinea. Genuine refugees among them are told they will never be resettled in Australia.

Amnesty International's claims that Australia's detention of asylum-seekers on the Pacific island of Nauru amounts to torture are "absolutely false," Prime Minister Malcolm Turnbull said Tuesday. Turnbull blasted the allegations and said his country's tough policies stopped people dying at sea on dangerous boat journeys. "I reject that claim totally. That is absolutely false," he told Australian Broadcasting Corporation radio of Amnesty's charge of systematic neglect and cruelty on Nauru. "The Australian government's commitment [to offshore processing of asylum-seekers] is compassionate and it's strong." As far as Nauru is concerned... there is a very substantial investment there, to improve the circumstances of the people that are there."

Amnesty International's report is based on research by senior director for research Anna Neistat, who traveled to Nauru in July for five days and met 58 refugees, asylum seekers and service providers. The report criticized Australia's offshore processing system, saying it fit the definition of torture under international law. Neinstat said her organization did not "come to these conclusions [about torture] easily." "It is the nature of the harm, the fact that it is systematic ... [and] deliberate, in the sense that it is being done with a clear purpose to create a deterrence, to punish," she told reporters in Sydney Tuesday. She slammed the veil of secrecy around the centers, saying she had to travel to Nauru in a personal capacity after her official applications were rejected six times.

A former case manager on Nauru, Sandra Bartlett, on Tuesday cried and said she was terrified about the legal consequences of speaking out, but that "more people will die" if action was not taken to remove them from the island.

The furor came as the ABC broadcast an investigation Monday night depicting the plight of refugee children living on Nauru.

Nauru's government Tuesday rejected the ABC report as "denigrating, racist, false and pure political activism" and "an insult to the people of Nauru."

The Nauru facility holds just over 400 men, women and children. Just over 800 asylum-seeker men are held on Manus, with Australia in August agreeing to close the camp following a PNG Supreme Court ruling.
RELATED TOPICS