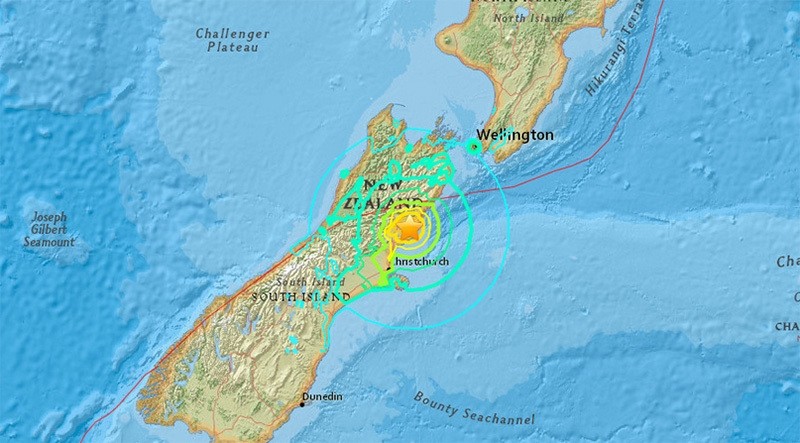 Residents in coastal areas of New Zealand fled through Monday night after a powerful 7.8 earthquake struck just after midnight, triggering a potentially "destructive" tsunami that has killed two people.

Prime Minister John Key said at least two people were killed and more fatalities were feared after the earthquake, centered north of Christchurch in the South Island, was felt throughout the country, causing widespread damage.

As tsunami warning sirens were activated in South Island coastal towns and along the east coast of the North Island, police and emergency workers went door-to-door to evacuate seaside properties.

A "destructive tsunami" with waves up to five metres (16 feet) was possible, the ministry of civil defence, responsible for emergency management in New Zealand, said in a bulletin.

Some early waves were up to two-metres but civil defence warned they could intensify and described the tsunami as "an event of life-threatening or national significance".

The earthquake struck at 12:02am Monday (1102 GMT Sunday) and was 23 kilometres deep, the US Geological Survey said putting the epicentre near the alpine tourist village of Hanmer and the rural township of Cheviot in North Canterbury.

It was one of the most powerful shakes to rock earthquake-prone New Zealand and ignited painful memories for residents in Christchurch which was devastated five years ago by a 6.3 tremor which killed 185 people.

"It was massive and really long," Tamsin Edensor, a mother of two in Christchurch, told AFP, describing the powerful quake as the biggest since the 2011 tremor which was one of New Zealand's deadliest disasters.

"We were asleep and woken to the house shaking, it kept going and going and felt like it was going to build up."

The main tremor was followed by a series of strong aftershocks and there were reports of damaged houses, roads were cut and rail and ferry services were halted.

In a brief message the Prime Minister John Key tweeted: "I hope everyone is safe after the earthquake tonight."

The ambulance service said it did not receive any reports of serious quake-related injuries however people took to social media to report damage with goods tipped from shelves and shattered glass littering streets.

"Family friends in Cheviot say some houses are gone," one person tweeted.

Marie Black, a local councillor who lives about 50 kilometres north of Christchurch, told the New Zealand Herald there were reports of damage to buildings in the North Canterbury region.

"It was a significant shake, I have felt several aftershocks and it is very unnerving," she said.

Civil Defence boss Sarah Stuart-Black said people should not be fooled if the first tsunamis were not as big as predicted particularly in the top half of the South Island.

"It could be as high as three-to-five metres. The first waves have hit but it may be the first waves may not be the biggest," she said.

Simon Morton, a radio presenter in the capital city Wellington, said he had evacuated his house after noticing the tide dropping away. Other people had joined him in going to higher ground.

In several cities guests were forced to evacuate hotels when the quake hit, including Nelson, about 200 kilometres from the quake centre where the touring Pakistan cricket team are staying.

"Some of the boys were in prayer, some were watching the India-England Test on TV when we felt the windows shake," team manager Wasim Bari told ESPNcricinfo.

"The whole room began to shake. We were on the sixth and seventh floor, and evacuated immediately."

In September, a strong 7.1-magnitude earthquake struck the east coast of New Zealand, generating a small tsunami, but no significant damage or injuries were reported.

New Zealand is on the boundary of the Australian and Pacific tectonic plates, which form part of the so-called "Ring of Fire", and experiences up to 15,000 tremors a year.