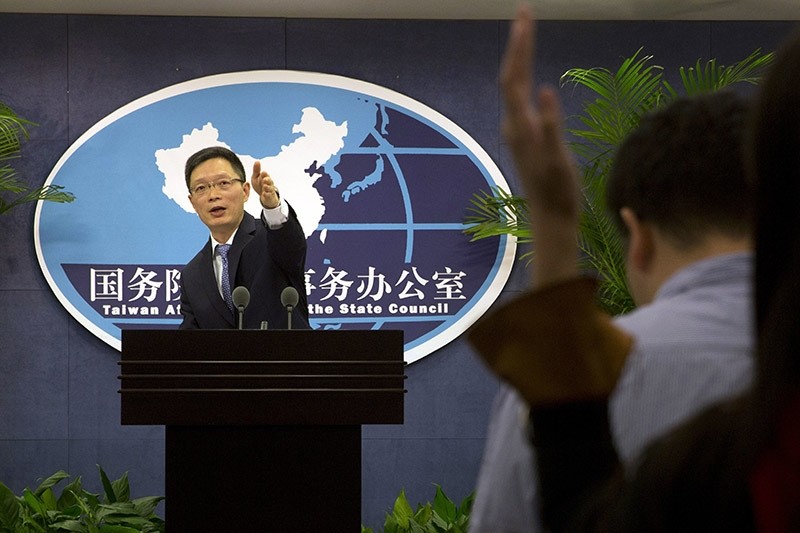 Taiwan Affairs Office spokesman An Fengshan signals for questions from a journalist at a routine press conference in Beijing, China on Wednesday, Dec. 14, 2016. (AP Photo)
by Dec 14, 2016 12:00 am

China's Taiwan Affairs Office said on Wednesday any interference with or damage to the "one China" principle would have a serious impact on peace and stability in the Taiwan Strait.

U.S. President-elect Donald Trump said on Sunday the United States did not necessarily have to stick to its long-standing position that Taiwan is part of "one China", further upsetting China which was already angered by Trump's earlier telephone call with Taiwan President Tsai Ing-wen.

The issue is highly sensitive for China, which considers Taiwan a renegade province, and Beijing expressed "serious concern" about Trump's remarks.

An Fengshan, a spokesman for China's policy-making Taiwan Affairs Office, told a regular news conference the Taiwan issue was about China's sovereignty and territorial integrity.

"Upholding the 'one China' principle is the political basis of developing China-U.S. relations, and is the cornerstone of peace and stability in the Taiwan Strait," he said.

"If this basis is interfered with or damaged then the healthy, stable development of China-U.S. relations is out of the question, and peace and stability in the Taiwan Strait will be seriously impacted," An added.

Taiwan's policy-making Mainland Affairs Council said peaceful relations were a mutual responsibility across both sides of the Taiwan Strait.

"Taiwan has repeatedly stressed that maintaining peace and stability across the Taiwan Strait and throughout the region is in the best interests of all parties," said MAC spokesman Chiu Chui-cheng.

"Taiwan places equal weight on the development of Taiwan-U.S. relations and cross-strait relations." China is deeply suspicious of Tsai and her ruling Democratic Progressive Party, believing they want to push for the island's formal independence, a red line for Beijing.

China has repeatedly warned the hard won peace and stability across the narrow strait that separates them could be affected by any moves towards independence. "I think the facts tell these people that Taiwan independence is a dead end," An said.