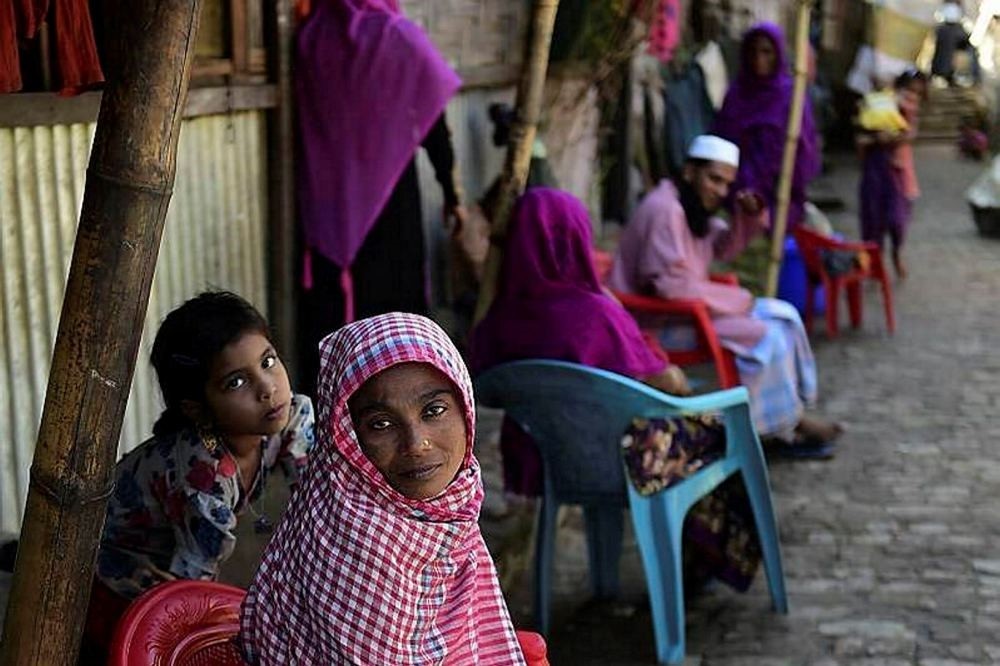 Rohingya refugees look on in a refugee camp in Teknaf, in Bangladesh's Cox's Bazaar.
by Compiled from Wire Services Feb 01, 2017 12:00 am

Bangladesh plan to relocate Rohingya refugees from Myanmar to 6,000-acre island. Critics state that it would lead to terrible consequences, saying that the island is uninhabitable and prone to flooding

Bangladesh has resurrected a plan to relocate thousands of Rohingya Muslims fleeing violence in Myanmar's northwestern Rakhine State to a flooded island in the Bay of Bengal to prevent them from "intermingling" with Bangladeshi citizens. The idea sparked an outcry from Rohingya community leaders while a UN agency said a forced relocation would be "very complex and controversial."

Bangladesh first proposed the idea of sending the Rohingya to Thengar Char, which floods at high tide, in 2015, prompting anger among rights groups.

A notice dated Jan. 26 and posted on the website of the Bangladesh government's cabinet says several committees had been formed to look at the influx of Rohingya Muslims, which the country fears could lead to law and order issues as they mix with local residents.

Dhaka was preparing a list of the people who would be temporarily moved to Thengar Char before being sent back to Myanmar, the notice said.

A senior official at Bangladesh's home ministry said the process to shift the Rohingya to the island would take time and that "if that place is not livable, the government will make it livable".

Hundreds were killed in communal clashes in Rakhine in 2012, exposing a lack of oversight of the military by the administration of Nobel Peace Prize winner Aung San Suu Kyi.

Hatiya Island is situated on the estuary of the River Meghna and is nine hours' journey from the camps where the Rohingya have taken shelter.

Some 232,000 Rohingya Muslims -- both registered and unregistered -- were already living in Bangladesh before over 65,000 stateless Rohingya fleeing violence in Myanmar's western state of Rakhine began entering the country last October.

Most of those who fled to Bangladesh live in squalid conditions in refugee camps in Cox's Bazar district, which borders Rakhine state and is home to the country's biggest tourist resort.

Bangladesh has also asked its officials in the border districts to identify the Myanmar nationals who "illegally infiltrated" the country. "It has to be assured by taking preventive measures that they (refugees) cannot spread out and mix with the locals," read the order which was dated January 26. "The identified refugees should be arrested or pushed back to the camps if they try to go out beyond the assigned boundary."

The Rohingya refugees mostly live in squalid conditions in Cox's Bazar. Bangladesh first mooted the idea of relocating them in 2015 despite allegations that the island was still not ready for human habitation.

The United Nations says about 92,000 people have fled the Muslim-majority northern part of Rakhine to Bangladesh since attacks that killed nine Myanmar border police on Oct. 9, sparking a heavy-handed security response in which scores were killed. "At least 92,000 people are now estimated to be displaced from their homes to other parts of northern Rakhine or to Bangladesh," said the UN's Office for the Coordination of Humanitarian Affairs (UNOCHA). "In Maungdaw north [Rakhine State], more than 23,000 people are estimated to be internally displaced," UNOCHA said in its weekly report, adding that this is the area the most affected by the violence. "This is in addition to the 69,000 people now estimated by the UN to have crossed into Bangladesh."
RELATED TOPICS